The bullet had only grazed the victim’s hip and then been stopped by his Motorola mobile phone, which was encased in a cover displaying the Incredible Hulk.

A man had a narrow escape from death, thanks to his mobile phone! Wondering how? The man who hails from Brazil survived being shot during an armed robbery after the bullet hit this Incredible Hulk case placed around his phone. The incident happened on October 7th, when the man was shot during an attempted robbery in a rural area of the municipality of Petrolina.Also Read - Massive Alligator Attacks Swimmer & Bites His Arm, Video Leaves Twitter Horrified | Watch

After shots were fired at him, the police rushed to the scene but the suspects had fled the scene. Meanwhile, the nameless victim was taken to the University Hospital in Petrolina by paramedics. Though the doctors initially feared the worse for the victim, they soon realised that the bullet didn’t penetrate his skin. Also Read - From TV to Mobile Phones, Locals in Bhopal Villages Get Rewards For Ensuring Cleanliness at Their Homes & Surroundings

The bullet had only grazed the victim’s hip and then been stopped by his Motorola mobile phone, which was encased in a cover displaying the Incredible Hulk. Also Read - Man Waits For 6 Months After Swallowing Phone, Undergoes Surgery After Experiencing Pain 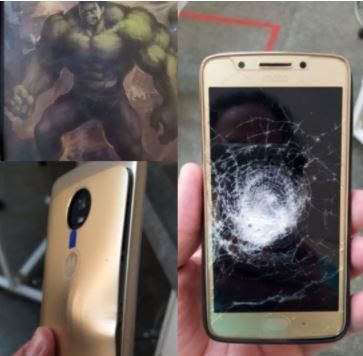 Though the man was shaken, he only had pain in his hip area, which had only received a small bruise, according to Dr Pedro Carvalho, who treated him. Following the incident, Dr. Carvalho posted photos of the phone cover and damaged Motorola phone of the victim on Twitter.

Meanwhile, the suspects are yet to have been identified and it is unclear as to whether the police will continue to investigate the case going forward.

Brazil is said to be the country with the highest number of intentional homicides in the world, with 57,358 in 2018, as per Reuters and US News.