Harris went on to add 106 runs for the eighth wicket with Smith and helped Australia cross 400-run mark. 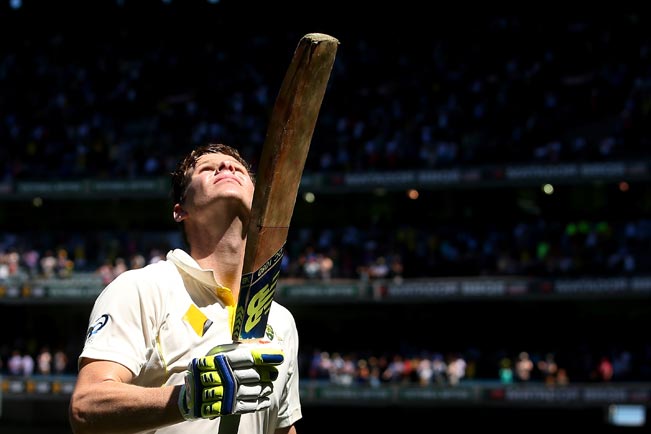 India once again allowed the tail to wag as Australia crossed the 500-run mark. After resuming on overnight score of 259 for five, Australia, with the help of Steven Smith’s 192 posted 530 in their 1st innings. In reply, India at stumps on day two were 108 for the loss of Shikhar Dhawan’s wicket and trail by 422 runs. Here is more on how the action unfolded Also Read - IND vs AUS: India to Undergo Two-week Quarantine Period in Adelaide, Says CA Acting Chief Nick Hockley

Brad Haddin departs after fifty, Steven Smith gets to ton: The first wicket to fall for Australia this morning was Brad Haddin. The wicketkeeper-batsman had shared an unbeaten overnight stand of 43 with Steven Smith and the duo continued to add runs to their tally. Haddin looked aggressive and after poor run in the preceding matches notched up a valuable half-century. On the other end Smith continued to hammer Indian bowlers as he registered his seventh Test century. In the process the duo completed their century stand for the sixth wicket, with Haddin dismissed off Mohammad Shami their overall stand was worth 110 runs. Also Read - India vs Australia: Brett Lee Heaps Praise on Indian Pacers, Says They're Capable of Knocking Over Any Top Order

Steven Smith and Mitchell Johnson add fifty for the seventh wicket: After Haddin’s dismissal Mitchell Johnson stitched a valuable 50-run stand with Smith. Johnson did the bulk of scoring in the partnership and found boundaries at will. Ravichandran Ashwin then had Johnson stumped for 28 runs with score reading 326 for seven.

Ryan Harris frustrates India: With Australia seven wickets down, India were eyeing to clean up the tail, but number nine batsman Ryan Harris showed he is no mug with the bat. Harris went on to add 106 runs for the eighth wicket with Smith and helped Australia cross 400-run mark. The tail-ender showed intent to bat and played some fabulous shots to notch up his half-century. Harris then was trapped in front of the wicket off Ashwin for 74, but he had already done the damage.

Steven Smith falls short of 200 as Australia all-out: Australia captain Steven Smith once again pulverised Indian attack and added valuable runs with lower order batsmen. After Harris’s dismissal, Smith played aggressively as Australia lost the wicket of Nathan Lyon as well. Nine down, all eyes were on Smith whow as approaching his double ton, but the right-hander fell eight runs short of the milestone and was last Australia wicket to fell.

India 108 for 1at Stumps: India got off to a decent start as openers Murali Vijay and Shikhar Dhawan put on half-century stand. Both looked promising and helped India get off to a positive start. Dhawan then fell to Ryan Harris for 28 and India lost their first wicket on 55. Vijay, who scored his fourth fifty plus score in the series, along with Cheteshwar Pujara then made sure India go to stumps with just one wicket down. At close of play India were 108 for one with Vijay and Pujara batting on 55 and 25 respectively.