India Vs Pakistan Asia Cup 2014: 6 of the most thrilling matches between the arch-rivals

The India Pakistan rivalry cannot be matched by anything when it comes to cricket, not even the ashes. 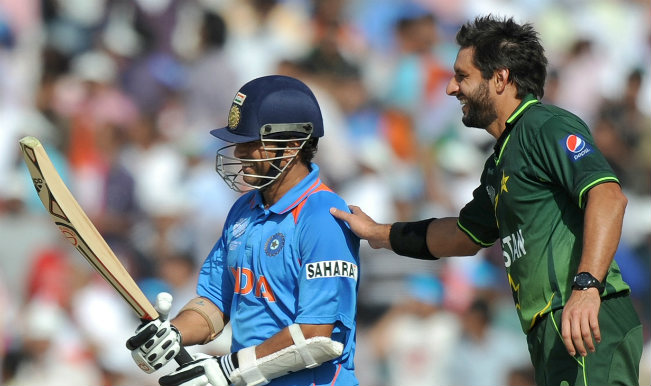 Emotions have always been high whenever these two teams have met on a cricket field. It gives the players that extra push and the spectators that reason to be patriotic again. The India Pakistan rivalry cannot be matched by anything when it comes to cricket, not even the ashes.Also Read - Rohit Sharma Replaces Virat Kohli as Team India's ODI Captain: Here's How Twitter World Reacted on BCCI's Big Announcement

On Sunday these two teams will meet in the group stage of the Asia cup in a do or die situation for both the teams. It will be a test of nerves, emotion and temperament and the team that manages to keep these things in the right amount at the right place will surely emerge on top. Over the years India and Pakistan have met in a number of classics and here’s a list of the matches that stand out among all of them as simply outstanding. Also Read - Bipin Rawat Dies in Chopper Crash: Virat Kohli, Sachin Tendulkar, Mary Kom Lead Sports Fraternity Tributes For Chief of Defence Staff And 12 Other Martyrs

1- Australasia cup final 1986, Sharjah: Chetan Sharma might have retired but the ghost of this last ball full toss to Javed Miandad must be haunting him even today. Needing 4 of the last ball, Javed Miandad lofted Chetan Sharma’s full toss delivery over mid wicket to register the most famous victory in the rivalry. Chasing a target of 246 to win Pakistan were in all sorts of trouble at one stage but Javed Miandad guided them home with a breath taking innings of 116 of 114 deliveries. Also Read - Rohit Sharma Becomes Team India's New White-Ball Captain, Virat Kohli Sacked From ODI Captaincy

2- Rothman’s four nations cup 1985, Sharjah: Imran khan bowled one of the most hostile spell ever and bundled up the Indian batting for 125. But all was not over yet as the Indians fought back on the support of some spirited and united bowling effort which helped them bowl out the Pakistani team at the score of 87 and claim the match by 38 runs.   Certainly one of the most famous comebacks in cricketing lore.

3- The friendship series 1st match 2003: India was touring Pakistan after a gap of 14 years and the first game of the bilateral series itself proved to be every bit that people expected it to be. Batting first India scored 349 on the back of some solid hitting from Virendra Sehwag and a brisk 99 from Rahul Dravid. Pakistan, o the back of 122 from Inzamam ul Haq needed just 9 runs from the final over. But some very good bowling in the last over by Ashish Nehra won India the match by 5 runs.

4- 2003 World Cup group stage, Centurion: Pakistan batted first and put up a total of 273 for five. Being a world cup match the tension was high plus add the fact that Pakistan had one of the best bowling attacks in the world the chase didn’t seem that easy at all. But this was the day when Sachin Tendulkar decided to show the world that he indeed is the god of cricket. 98 runs of 75 deliveries sealed an easy victory for India. The upper cut of Akhtar over third man for the maximum will always live in the memory of the Indian audience.

5- The Independence Cup finals:  On the back of Saeed Anwar’s 140 and a 117 by Ijaz Ahmed Pakistan posted a total of 314 runs which meant that India needed to pull off a world record chase in order to win the match. India began the chase in a sublime fashion with Sachin Tendulkar blasting the Pakistani bowling before falling for 41 of 26 deliveries. But after this robin Singh (82) and Sourav Ganguly (140) guided India to 250 for 1. But some late innings drama meant that India still needed 9 runs of the last over.  Hrishikesh Kanitkar found the boundary on the second last ball of Saqlain Mushtaq and sealed a famous victory for India.

6- 1996 World Cup quarter finals: This match produced the famous scenes of Aamir Sohail walking down the pitch and taunting Venkatesh Prasad that he will hit him for boundaries if he keeps bowling. On the very next delivery Venkatesh uprooted the stumps giving the Indians the wicket and ultimately the match. On the field, India had set the visitors 288 to win, despite their top-order failing to hit full stride at any stage; Ajay Jadeja playing the defining hand with 45 from 25 balls.. Pakistan started the chase in blistering fashion but after the loss of Aamir Sohail’s wicket they ultimately lost their way and India won their second consecutive match against the Pakistani’s in the world cup.

Hyderabad 1987 – India won a tie on virtue of losing a wicket less than the Pakistanis.

So expect to see the same amount of drama and the same amount of enthusiasm from the people and the players as we have seen throughout the years. Both the teams are going through a transitional phase but the rivalry is still the same. So get ready to see another hard fought classic on Sunday in the Asia cup.