International Women's Day 2017 is celebrated on March 8. This day salutes all women for their resilience, patience and hard work.

International Women’s Day 2017 will be celebrated on March 8, like every year. This day encourages women and salutes them for their resilience, patience and hard work. Women’s Day symbolises a woman’s determination and courage and highlights her progress made throughout the years. There are several women who have exceptional contributions to society and on Women’s Day, we must extend our support and thank them for their input. The United Nations 2017 theme for International Women’s Day is ‘Women in the Changing World of Work: Planet 50-50 by 2030’. And their hashtag for the them is #BeBoldforChange and it talks about women’s empowerment through gender equality in every sphere of life.Also Read - Lead India Foundation Honours India's 111 Most Powerful Women on International Women's Day 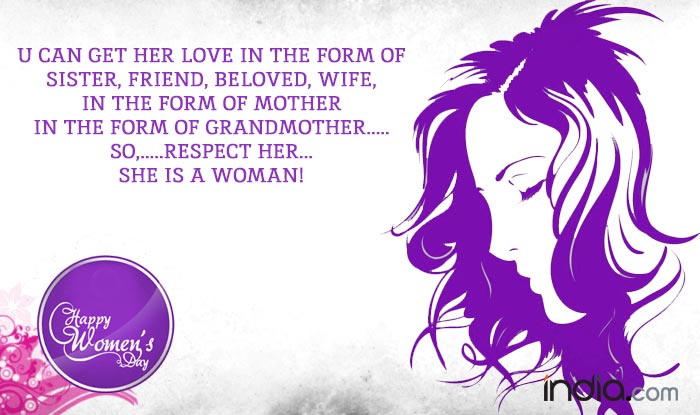 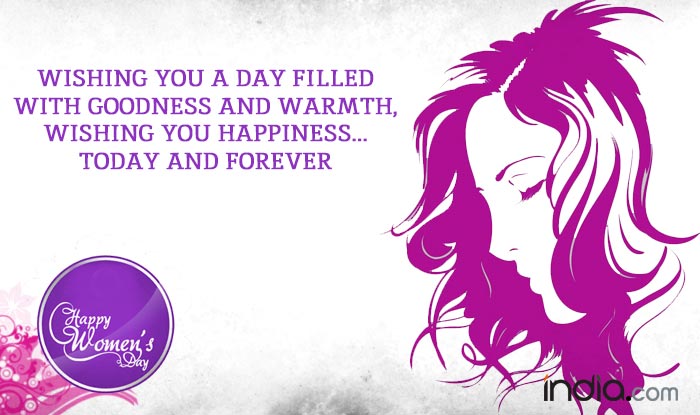 Wishing you a day filled with goodness and warmth,
Wishing you happiness… today and forever,
Happy Women’s Day! 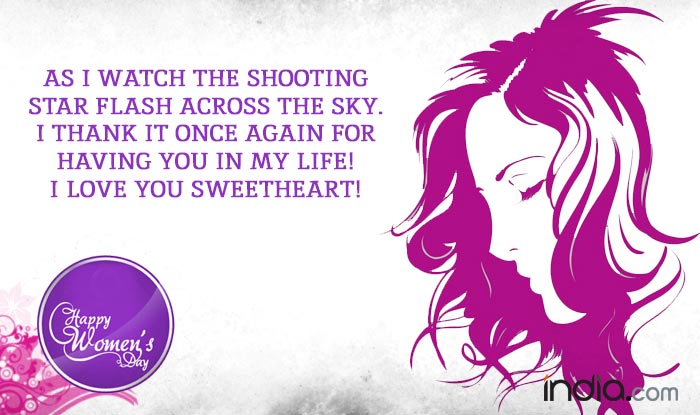 As I watch the shooting star flash across the sky.
I thank it once again for having you in my life!
I love you sweetheart!
Happy Women’s Day 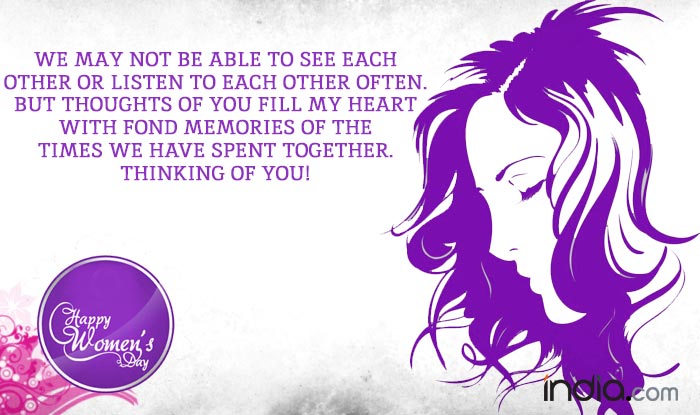 We may not be able to see each other or listen to each other often.
But thoughts of you fill my heart
with fond memories of the times we have spent together.
Thinking of you!
Happy Womens Day Sweetheart 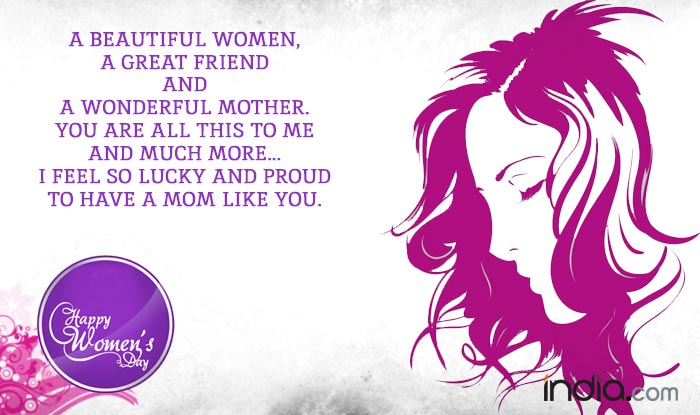 A beautiful women,
a great friend
and
a wonderful mother.
You are all this to me
and much more…
I feel so lucky and proud to have a mom like you.
Happy Women’s Day to Mother 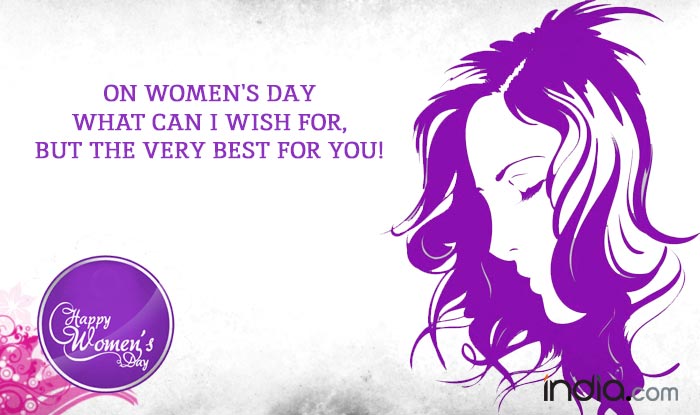 On women’s day what can I wish for,
but the very best for you!
Happy Women’s Day! 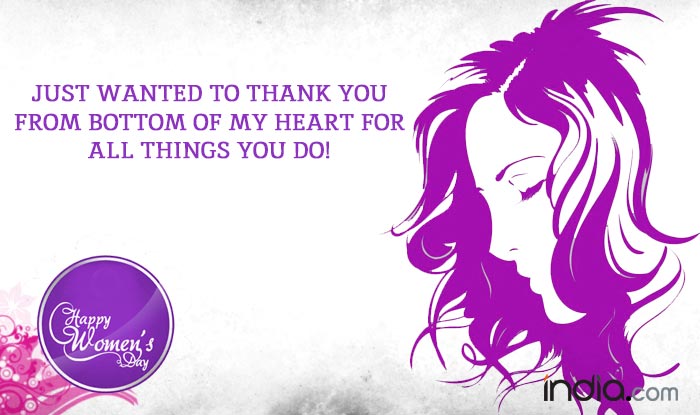 Just wanted to thank you

from bottom of my heart for
all things you do!
Happy Womens Day! 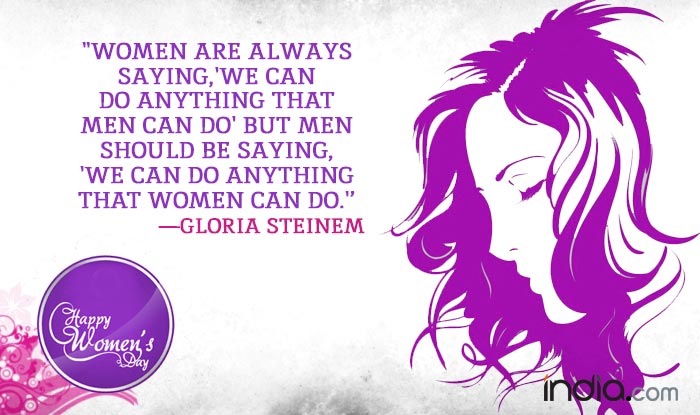 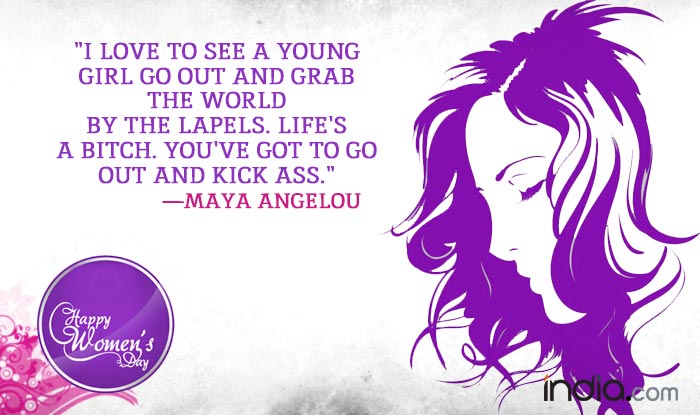 Quote reads: “I love to see a young girl go out and grab the world by the lapels. Life’s a bitch. You’ve got to go out and kick ass.” —Maya Angelou 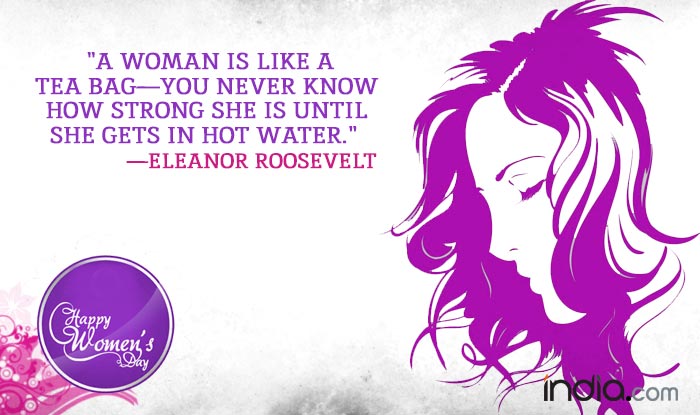 Quote reads: “A woman is like a tea bag—you never know how strong she is until she gets in hot water.” —Eleanor Roosevelt 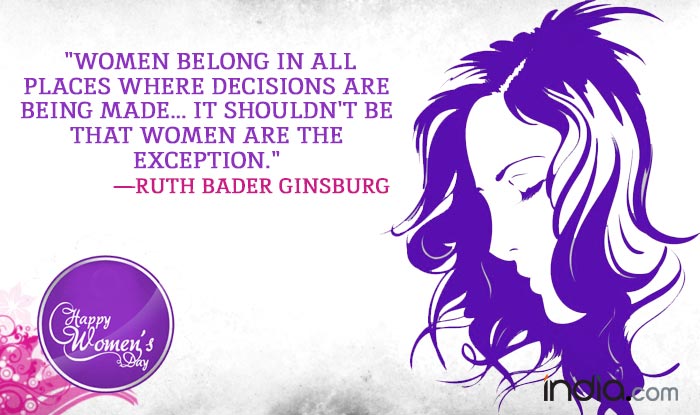 Quote reads:“Women belong in all places where decisions are being made… It shouldn’t be that women are the exception.” —Ruth Bader Ginsburg 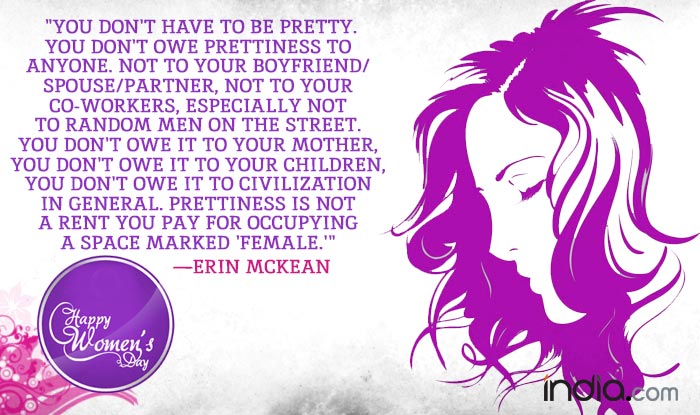 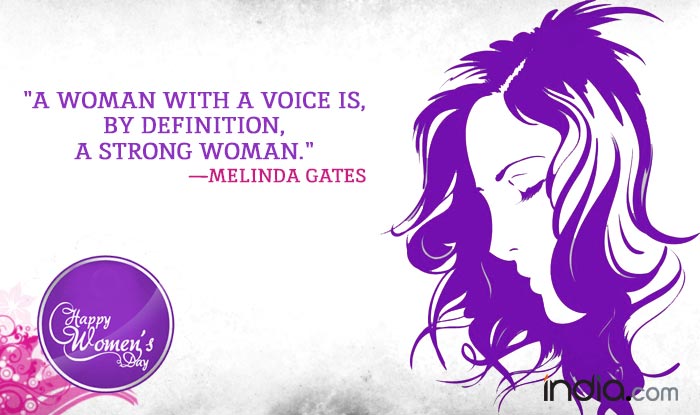 Quote reads: “A woman with a voice is, by definition, a strong woman.” —Melinda Gates 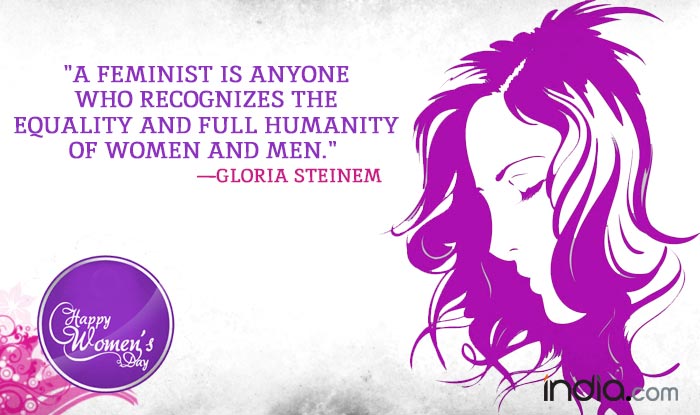 Quote reads: “A feminist is anyone who recognizes the equality and full humanity of women and men.” ―Gloria Steinem 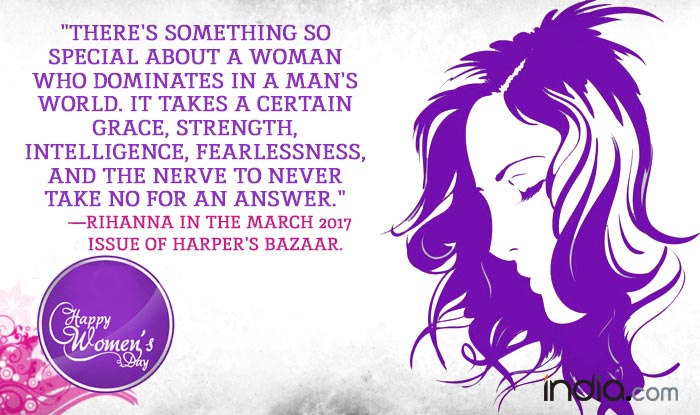 Quote reads: “There’s something so special about a woman who dominates in a man’s world. It takes a certain grace, strength, intelligence, fearlessness, and the nerve to never take no for an answer.” —Rihanna in the March 2017 issue of Harper’s BAZAAR. 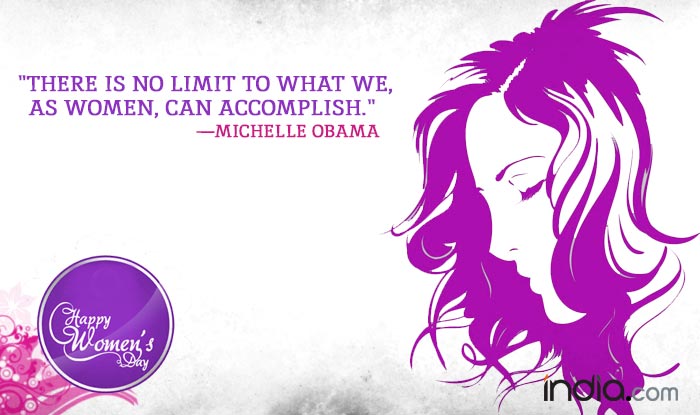 Quote reads: “There is no limit to what we, as women, can accomplish.” —Michelle Obama 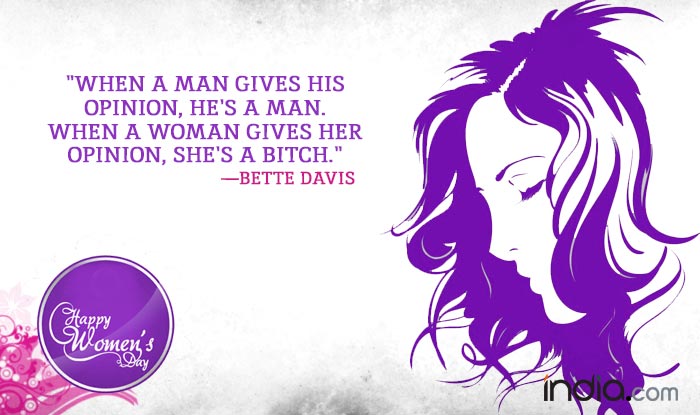 Quote reads: “When a man gives his opinion, he’s a man. When a woman gives her opinion, she’s a bitch.”―Bette Davis 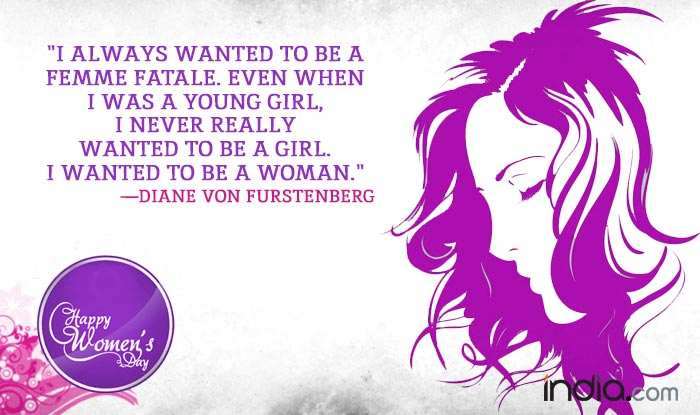 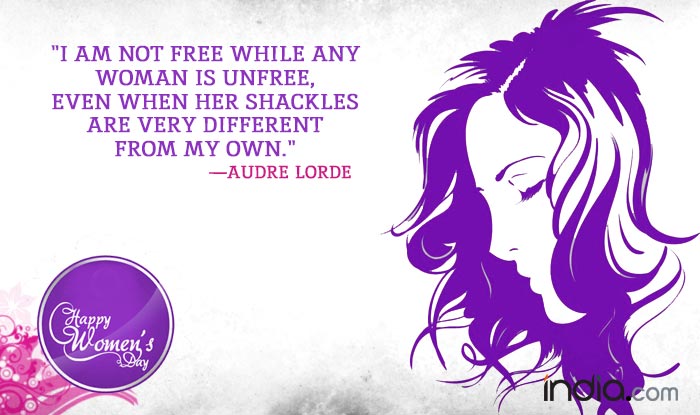 Quote reads: “I am not free while any woman is unfree, even when her shackles are very different from my own.” —Audre Lorde 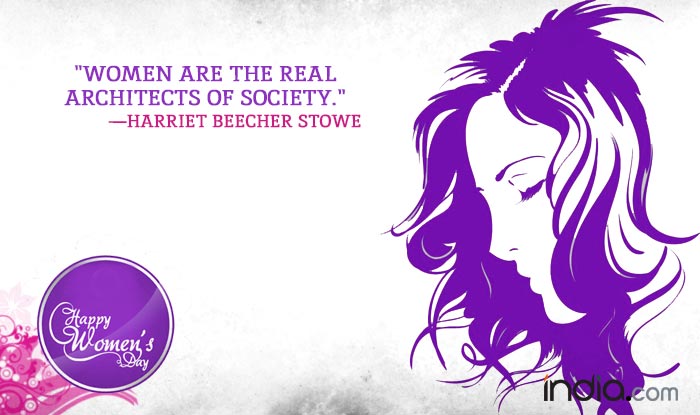