Viral WhatsApp messages claim that PM Modi's 9 pm requestfor April 5 is to 'light the energy of the planet' so that we can effectively fight the coronavirus. Check here.

PM Modi announced a new task for the people of the country when he addressed the nation at 9 pm on Friday and asked everyone to light a diya or a lamp or a torch on the night of April 5, Sunday. The announcement was welcomed by most people and now some of them have also claimed to have found a not-so-logical reason behind Modi’s ‘9 baje 9 minute’ request. Also Read - 9 Minutes, 9 PM: How PM Modi's 'Light Diyas And Candle' Call May Help India in Its Fight Against COVID-19?

Two viral messages that are being circulated widely on WhatsApp link Modi’s request to numerology and claim that the PM is trying to ‘light the energies’ of the planet Earth by asking the countrymen to indulge in a collective activity at the end of which positive beam of light will help defeat the deadly coronavirus. Again, these are just illogical claims without any factual reference or pragmatic approach. Also Read - 'Light a Diya of Reason, Not Superstition', Congress' Kapil Sibal Mocks PM Modi's Appeal to Nation

The first viral message that might have been shared in the WhatsApp family groups of most people reading this article claims that it’s the power of the number ‘9’ that Modi is using to fight COVID-19 in the country. The text manages to show how the total of numbers and the dates and timings that Modi has chosen – all end up becoming a ‘9’ at last. Another message that’s being heavily shared around claims that April 5, as per the Hindu calendar, is ‘Vamana Dwadashi’ which is the day when earth receives the maximum light from the sun. The message claims that Modi chose Sunday for the task because he wants to use the power of the sun’s light to ‘defeat the evil entity that the virus is’. Check out the messages here: Also Read - Netizens Share Fake NASA Image of India After PM Modi's Request to Switch Lights on April 5 at 9PM 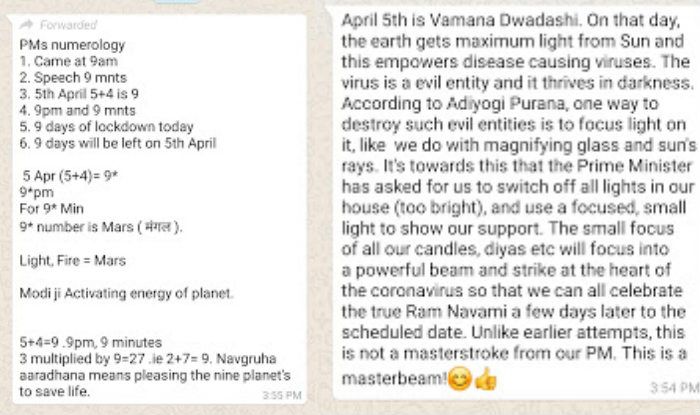 It’s interesting to see how PM Modi’s words become so popular among the crowd that there’s no way they are not crawling up the trends or not going to be linked with superstition. Lighting up diyas is a ritual that is performed by people practising Hinduism while celebrating the festival of Deepawali or Diwali. On April 5, Diwali is going to be celebrated months before it actually falls. Gear up to see the enthusiasm now, however, by maintaining the protocols of social-distancing because at the end of the day or any speech, self-isolation is your only rescue from the coronavirus!