Sonam Kapoor has shared a new picture of herself on Instagram. Fans think she's pregnant and ready to embrace motherhood soon.

Actor Sonam Kapoor recently posted a photo of her looking stylish in a white bow-detailed shirt. While everything about her look is stunning, there’s something that her fans can’t stop talking about. Sonam posted the picture of herself wearing that white shirt on Instagram. The photo has lead to the speculations of the actor’s pregnancy. Also Read - Priyanka Chopra, Sonam Kapoor Help Netizens With Updated List of Resources Amid COVID-19 Second Wave

In the picture, Sonam is seen sitting while the giant bow seems strategically positioned on her belly. This has made the fans think that their favourite actor is expecting her first baby with husband Anand Ahuja. Take a look at the picture here: Also Read - Rhea Kapoor Shares Bold Bikini Picture With Body Positivity Note, Reveals 'I Thought I Was Fat'

White shirt with a bow.. isn’t it lovely @atsusekhose 📸 @anandahuja

One user commented on the photo and wrote, “Are we hinting… something, Ms. Sonam?” (sic), while another user wrote, “Omg you are pregnant 🤰🏽” (sic). Check out the comments here: 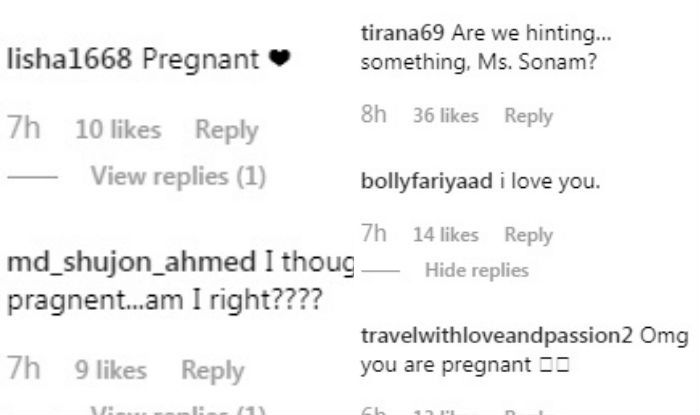 In the picture that Sonam shared a few days back, she was wearing a green dress that complimented her frame perfectly. The picture had no hint of the actor being pregnant. However, in the latest picture, it’s her pose and the detailing of the bow that seems to be highlighting her belly by putting more focus there.

Meanwhile, the actor is currently busy with her upcoming film The Zoya Factor. It features her with Dulquer Salmaan in the lead. The film is based on Anuja Chauhan’s book of the same name. Sonam plays the character of the girl who emerges as a lucky person for the Indian cricket team. The actor has also got Battle of Bittora directed by Shashanka Ghosh. The film also features Farhan Akhtar in the lead.