Beaten in their own home turfs, their grand formulas and ingenuous strategies for electoral victories proven false and driven to the wall, the desperation of stalwarts of the erstwhile socialist Janata Parivar 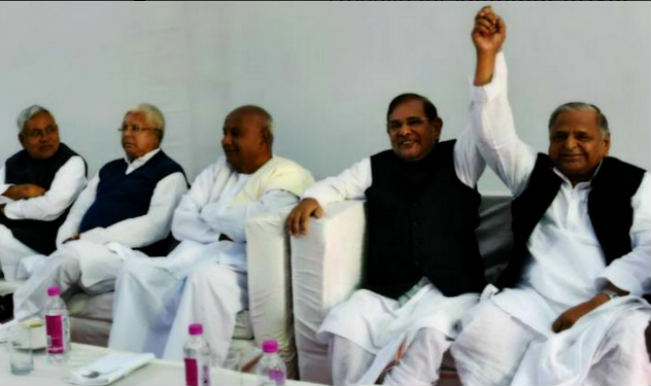 Beaten in their own home turfs, their grand formulas and ingenuous strategies for electoral victories proven false and driven to the wall, the desperation of stalwarts of the erstwhile socialist Janata Parivar (as opposed to Jan Sangh which was also part of Janata Party and later became the BJP) to orchestrate a hasty family merger is quite understandable. Also Read - UP Elections 2022: Priyanka Gandhi Makes A Massive Statement, Says Congress To Contest ...

The desperation of the socialist Janata Parivar walas desperation stems from the fact that assembly elections to Bihar are scheduled for 2015. The Socialist Janata warhorses have been gripped with fear and have been forced to go into defensive mode by a resurgent BJP riding on the extended honeymoon of the Aam Aadmi with Narendra Modi which has already firmed up its war strategy. Also Read - 7th Pay Commission: Bihar Govt Announces 15% Salary Hike For 3.5 Lakh Teachers From January | Details Here

Six former members of the erstwhile Janata Party — JD(U), RJD, Samajwadi Janata Party, INLD, JD(S) and the SP – held confabulations to form a united front and later merge into a single entity. The biggest alliance of Janata Party splinters-turned regional parties would have a large footprint spread across Uttar Pradesh, Bihar, Karnataka and Haryana, with pockets of influence in other states. The new alliance could, the socialist Janata leaders believe, could take on the BJP and Congress and with the help of the Left Front and other regional parties like the BJD, TMC, AIADMK or the DMK, revive the Third Front which lies comatose only to revive ahead of general elections.

While the initial round of talks remained inconclusive, the leaders Nitish Kumar and Sharad Yadav from the JD (U), Lalu Prasad of RJD, Samajwadi Janata Party chief Kamal Morarka, INLD head Dushyant Chautala and JD(S) chief HD Deve Gowda are expected to congregate at Samajwadi Party chief Mulayam Singh Yadav’s Delhi residence to thrash out the modalities and the roadmap for united front.

While it is learnt that Mulayam, Gowda and Morarka are in favour of a merger, Lalu has been dragging his feet even though his ally Nitish-Sharad combine are gung ho about the merger. UP strongman Mulayam Singh Yadav is expected to head the new alliance as he has the largest number of MPs in parliament.

While the alliance suits parties like Samajwadi Party and Janata Dal (United) who are looking to hold on to their existing strongholds in Uttar Pradesh and Bihar, others like Lalu’s RJD, Gowda’s JD(S) and Om Parkash Chautala’s INLD have been soundly trounced in the state elections and are struggling to remain relevant.

Explaining the rationale behind the coming together of Janata splinter groups, JD(U) leader and former Bihar CM Nitish Kumar said, “We have same ideology. In today’s political context, the opposition should unite. When we unite then our voice will have power”. Nitish Kumar clarified in reply to a question that the alliance was “not about fear about any person. It’s about the nation”.

Both political and social compulsions have forced the two Yadavs – Lalu and Mulayam – to forget their acrimonious relations. Mulayam also seems to exonerated Lalu of the charge that it was the Bihar leader who had thwarted his chances of becoming the Prime Minister.

The rivalry between Nitish Kumar and Lalu Prasad is also well known. For long the relations between the friends-turned-bitter-foes-turned-friends again had been oscillating between love and hate and seems to have finally seems to be stuck at love for the sake of survival. The rise of Narendra Modi in both UP and Bihar seems to have forced the leaders to hit panic button and sent them scurrying into each other’s arms. The results of the Bihar assembly by-polls held in August validated the belief of the socialist Janata leaders about the need for them to bury their hatchets and put up a unified front to stop the advance of the BJP.

All the players currently involved in the merger talks — SP, RJD, JD(U), INLD, JD(S) — all were routed by the ‘NaMo wave’ in their respective strongholds. The BJP-led NDA has set up the goal of winning 172 plus of the 243 assembly seats. Prime Minister Narendra Modi inducting eight ministers in the Union cabinet, has been seen as a step to bolster BJP’s chances in the assembly polls next year.

The socialist Janata leaders seem to have finally realized the wisdom of the phrase united we stand and divided we fall. By coming together, there is a fair chance the unified party can effectively counter the BJP. But whether the leaders can pull the wool over the eyes of the electorate only time will tell.