A powerful offshore earthquake of 7.8 magnitudes shook Tokyo, capital city of Japan on May 30, Saturday. 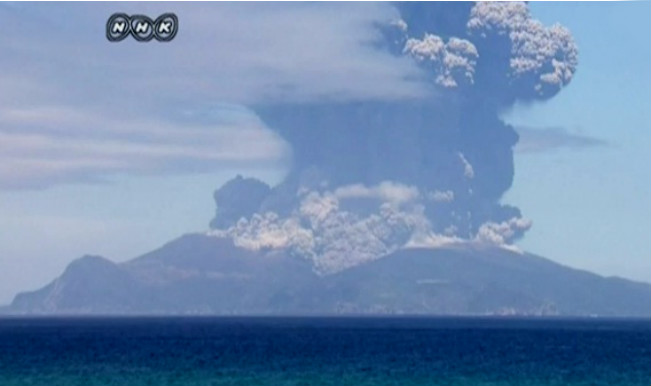 A powerful offshore earthquake of 7.8 magnitudes shook Tokyo, capital city of Japan on May 30, Saturday. Though there were no causalities reported, it still created the state of panic and fear after the tremors were felt near remote Japanese Islands, Ogasawara. What is shocking is the fact that the earthquake took place just a day after a massive volcanic eruption of Mount Shindake on the southern Japanese island of Kuchinoerabu was caught on camera on May 29, Friday. Also Read - Earthquake of Magnitude 7.0 on Richter Scale Jolts Southern Philippines

In the spectacular TV footage, one could see the rumbling of Mount Shindake spewing thick black clouds of smoke as high as 5.6 miles into the sky. The spine-chilling video was captured by the Japan Meteorological Agency and later broadcast by the Japanese public broadcaster NHK showing the high intensity of the volcanic eruption. There were no reports of anyone being grievously hurt except a man suffering from minor burns. But the authorities did not take any risks and evacuated nearly 140 people from the islands. Also Read - 34 Killed, Hundreds Injured After Earthquake of 6.2 Magnitude Rocks Indonesia's Sulawesi Islands

The earthquake on Saturday did not cause any damage but was powerful enough to throw normal life out of gear. There were reports of tremors being felt in Japan’s main island of Honshu, where train services were stalled as a result of power failure. Well, Japan would definitely be on high alert after successive days of being under threat, firstly with the volcanic eruption and later the earthquake. One will have to wait for the reports to know if there is any connection between Mount Shindake Volcano Eruption with the earthquake. Meanwhile, watch Mount Shindake Volcano Eruption video.