After the massive success of Queen, expectations from the Kangana Ranaut has reached its peak. Although 'Fashion' established herself, Queen seems to have elevated Kangana's bandwidth. She is not 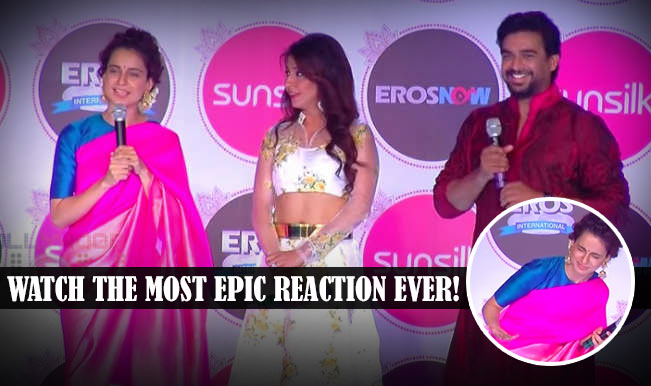 After the massive success of Queen, expectations from the Kangana Ranaut has reached its peak. Although ‘Fashion’ established herself, Queen seems to have elevated Kangana’s bandwidth. She is not only molding herself into the role but is growing to be adept at handling people. Also Read - Kangna Ranaut is Addicted to Gambling in Simran: Top 5 Signs of Gambling Addiction

At the promotions of Tanu Weds Manu 2, when a journalist asked her a stupid question and forced her to reply, she gave him a befitting reply that is worth a watch. While many were not expecting the beauty to give such a reply and the answer came as a shock to many. Also Read - Kangna Ranaut unveils the trophy at Jio MAMI 18th Mumbai Film Festival

She was asked, “With your favorite cricket player, Virat Kohli and favorite actor, Ranbir Kapoor all set to marry next year, which song are you planning to dance on their wedding?” Well yes, the question left people dumbfounded but the reporter was determined for an answer.

With her co-star Madhavan looking, she replied, “Do you think I am simple enough to answer any stupid question of yours”. Watch the video below to see Kangana’s epic reaction.  (Alia Bhatt shuts up reporter who tests her GK: Don’t ask if you don’t know, bro!) Recently Alia Bhatt had also lost her cool when a reporter tried to test her General Knowledge just her pull her leg.