Television actors Jennifer Winget and Karan Wahi are best of friends though both of them don’t often meet each other or posts pictures together on social media. However, they are known for their friendship and the fondness for each other. Recently, he tried the ‘Ask Me Question’ on Instagram and it turned out to be all fun with his wittiest answers. One fan asked him his bonding with Jennifer and he gave away the funniest response ever. Not only this, but he also added a picture with his response. Also Read - Karan Wahi Receives Hate Messages, Death Threats Over His Post on Naga Babas in Kumbh Mela Amid COVID-19 Crisis

Recently, Jennifer was in Kashmir for her New Year’s Vacation. She has shared a series of pictures from the snow-clad valley and was beaming with happiness as she entered the New Year. Along with her acting, she is also famous for her sartorial picks and always manages to impress fashion police. Also Read - Jennifer Winget Brings Second Season of CODE M, Shares Teaser on Army Day

Check out his response here: 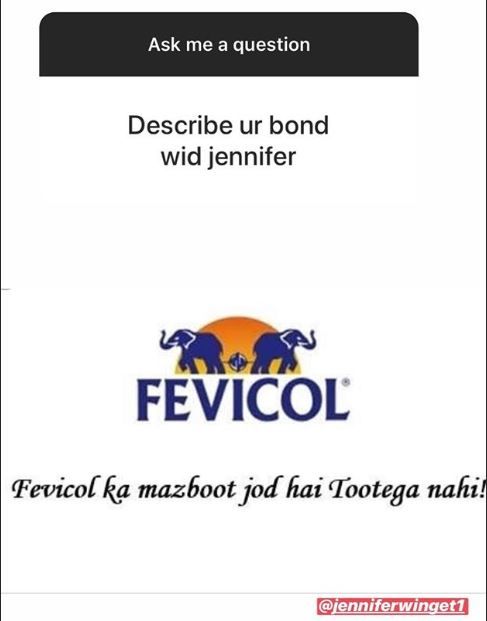 On the professional front, Karan Wahi made his Bollywood debut and will be soon seen in a web series ‘Bar Code’.

Jennifer was last seen in Bepannaah along with Harshad Chopra. In fact, people really appreciated her chemistry with Harshad Chopra. The show went off-air and talking about it she said, “The show ended in seven months and I think we could have given it a better ending, as I felt it was a bit abrupt.” Now, people are eagerly waiting for Jennifer’s new project.

The actress received praises for her performance in shows like Kasautii Zindagii Kay, Dill Mill Gaye and Saraswatichandra. She played the role of an obsessive lover in Beyhadh and was liked by everybody.