Kareena Kapoor Khan Trolled For Getting Irritated After Fan Asks For a Selfie, Netizens Call Her ‘Rude’

Kareena Kapoor Khan Gets Irritated After Being Chased by a Fan For Selfie, Netizens Troll Her For Being 'Arrogant' - Watch Video.

It is very common for Bollywood celebrities to get chased by their fans or even get mobbed by them sometimes. While many celebrities don’t shy away from obliging their fans with a selfie, there have been times when the situation went out of hand and the stars preferred to simply walk away. A similar incident happened with Angrezi Medium star Kareena Kapoor Khan recently while she was walking back to her residence with son Taimur Ali Khan. Also Read - Angrezi Medium Song Laadki Out: Kareena Kapoor Khan Expresses Daughters' Soul-Stirring Bond With Parents

On the day of Holi, Kareena was chased by a few female fans who wanted to get a selfie clicked with the Good Newwz actor. However, in the midst of haste, she got accidentally pushed by the fans and walked away after getting herself clicked in a hurry. The video of the same incident is now doing the rounds on the internet. Also Read - Happy Holi 2020: This is How Kareena Kapoor Khan, Karisma Kapoor, Soha Ali Khan, Mira Kapoor Are Celebrating The Festival Of Colours

In the viral video, Kareena can be seen walking out of the gate and a female fan is seen chasing her. As soon as they get out of the gate, Kareena reacts to the fan for pushing her in a hurry. She then poses with them for the paparazzi and gets back inside. Also Read - Kareena Kapoor Khan Spills Beans About Sara Ali Khan, Says 'Used to be a Brat', 'Did Naughty Things in my House'

Even though Kareena’s impromptu behaviour was not quite inappropriate, the video did not go well with the netizens as they found her behaving rudely with the fans. Reacting to the video, one user wrote, “my goodness…Look at her attitude. Very bad. I know sometimes fans and media create a very stressful situation for these celebs but you also need to understand that these fans do not get such occassions to stumble upon their fav stars. Little smile on her face and that acknowledgment would have brought smiles on the fans’ faces. No doubt why bebo is regarded as one of the most arrogant actresses in bollywood.”

Another trolled her and commented, “Why to give importance to such so-called stars, forget about clicking photos she didn’t even bother to smile.” 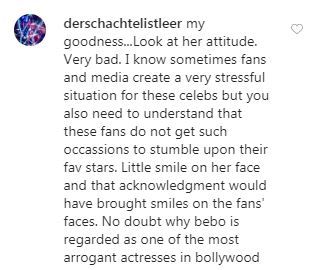 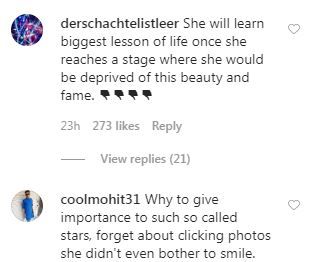 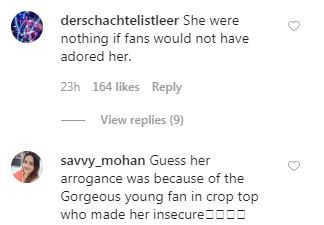 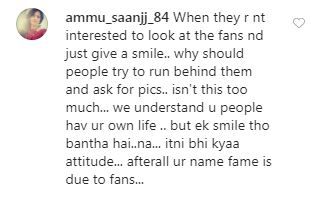 Meanwhile, Kareena finally made her debut on social media and her fans welcomed her with great enthusiasm. The actor has been posting the pictures of her family members on Instagram. First, she posted a picture of Taimur and then, of Saif playing the guitar.

On the work front, Kareena was last seen in Good Newwz opposite Akshay Kumar, Diljit Dosanjh and Kiara Advani. She will now be seen in Angrezi Medium opposite Irrfan Khan. Karan Johar’s Takht is also in the pipeline. She also has Laal Singh Chaddha opposite Aamir Khan in the pipeline.