Kareena Kapoor Khan is currently vacationing in Tuscany along with husband Saif Ali Khan and son Taimur Ali Khan. Now, a couple of photos have been shared on Instagram by a fan page where she can be seen soaking herself in the sun while she clicks a selfie. The pictures went viral instantly on social media. Bebo’s manager Poonam Damania also shared her pictures giving us glimpses of their dreamy summer vacay. However, her pictures did not go well with a section of netizens and they ended up calling her ‘Aunty Kareena Kapoor’, ‘She has grown old’ among others. Also Read - Strength To Strength! Kareena Kapoor Khan Shares Mother's Day Post For Babita Kapoor And Sharmila Tagore

In pictures, Kareena Kapoor Khan can be seen posing for the camera without makeup in a black, floral, halter-neck outfit. While she is seen with shades in one selfie, the other picture shows her soaking in the sun at a quiet place. Also Read - Viral Video: Anushka Sharma Auditions For Aamir Khan Starrer 3 Idiots | Watch Here

This is how she was trolled: 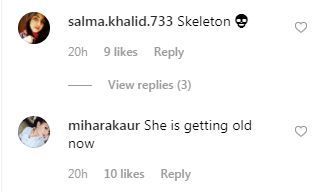 Kareena Kapoor has often been body shamed and became the target of trolls for her bold appearances. She has often been criticised for looking skinny or sporting a zero-size figure.

Meanwhile, on the professional front, Kareena Kapoor is currently working on Good News along with Akshay Kumar, Diljit Dosanjh and Kiara Advani. She has also roped Karan Johar’s Takht and Angrezi Medium opposite Irrfan Khan.