Battle of Sharmas! Karishma Sharma has become a internet's sensation after the 20-year-old posted a series of bold photos displaying her sultry looks and desirable body, which quickly went viral setting the social media on fire.

Sexy Indian television actress Karishma Sharma of Yeh Hai Mohabbatein fame has stirred storm an internet storm with her hot and sultry pictures on Instagram. On the other hand, TV’s regular hottie and third sexiest Asian woman, Nia Sharma is conspicuously missing from the social media. Nia has made her Instagram account private, but we wonder what made the 26-year-old sexy diva take such an action. Has Karishma Sharma’s growing popularity on the social media got anything to do with Nia’s absence from Instagram? Well, only the Jamai Raja actress knows the answer best. But one thing is sure, Pyaar Ka Punchnama 2 actress, Karishma is Instagram’s new stunner! The 20-year-old posted a series of bold photos displaying her sultry looks and desirable body, which quickly went viral setting the social media on fire. Also Read - Super 30 Song 'Paisa' Features Karishma Sharma's Sizzling Dance Moves

Karishma first came to the limelight when she had shared photographs from a bold and raunchy shoot a few months ago. Lately, the Delhi girl is once again dominating the headlines with another string of oomphalicious pictures posted on her Instagram feed. With the praise and appreciations, the girl was compared with TV’s poster girl in hotness quotient, Nia Sharma. Leading portals and publications pitted Karishma as the potential contender to take the sexiest TV actress tag from Nia Sharma. Also Read - Karishma Sharma Oozes Oomph in Red Bikini as She Relaxes on Lounger During Her Maldives Vacay

Just a few days ago, Nia Sharma was in the limelight courtesy her fun-filled Maldives holiday has suddenly decided to keep her personal life from private. The 26-year-old who rose to become a prominent social media star due to her bold and vivacious personality off the screen is suddenly distancing herself from her fans and followers. We have seen Nia take a strong stand on occasions against trolls who tried to slut shame and hence it comes as a shocker that the girl has made her Instagram account private. Is her absence from her favourite social media platform due to the media hyped – Battle of Sharmas? Also Read - Karishma Sharma Looks Super Hot in Sexy Yellow Bikini as She Vacays in Maldives 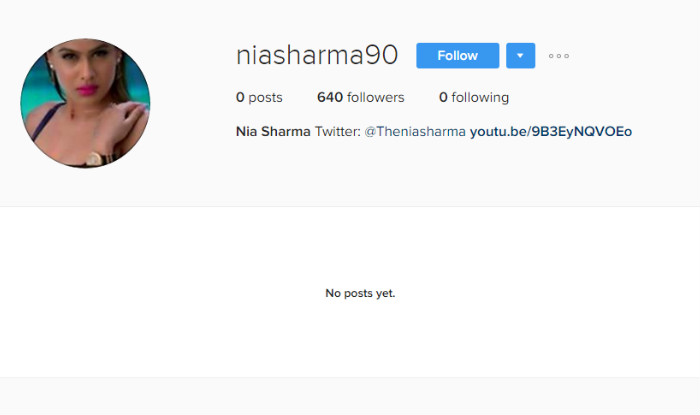 Nia Sharma beat the likes of Bollywood A-listed actresses Sonam Kapoor, Katrina Kaif and Alia Bhatt in the race to become the third sexiest Asian woman. From her eye-grabbing sexy red carpet appearances to bikini pictures posted from her vacations in US and Dubai helped the young star become the internet queen. But just when Nia Sharma thought to be an undisputed sexiest television star, she was challenged by Delhi actress Karishma Sharma.

Karishma has become an internet’s sensation with the girl posting one bold picture after another. A complete believer of ‘if you have it, you got to flaunt it’ principle, the Yeh Hai Mohabbatein is killing it on the social media. From displaying her perfect curves to an envious collection of wardrobe, Karishma definitely on her way to become the new queen of cyberspace. We hope Nia Sharma to be back on the Instagram soon and take on her challenger head on!