The tenth season of Rohit Shetty’s Khatron Ke Khiladi is all set to go on floors in Bulgaria and as Karishma Tanna begins shooting for the adventure-reality show, the Qayamat Ki Raat star was seen slaying like never before in the European streets. Causing the mercury to soar higher, Karishma treated the Internet to hot and sexy pictures of herself and not only her fans but also co-contestant and popular RJ Malishka Mendonsa swoon over the viral post.Also Read - Rohit Shetty on Adding a Female Cop in Universe, Cirkus, Critics, Sooryavanshi's Success, And More | Exclusive

In the pictures that Karishma shared on her Instagram handle, the diva can be seen donning a short neon-yellow dress that ended just above her things as she flaunted her well-toned legs glowing under the sunshine. The pictures were captioned, “A girl is a girl is a girl #sundayvibes #happymodeon #lovelife #thankuuniverse by @since1988.in @sayali_vidya (sic).” Quick to reply, RJ Malishka wrote, “Whistllllllle… also coz I got to see you saakshaat both days (sic).” Also Read - Sooryavanshi Day 11 BO Collection: Akshay Kumar-Katrina Kaif Starrer Crosses Rs 235 Crore Worldwide, Rohit Shetty Reacts 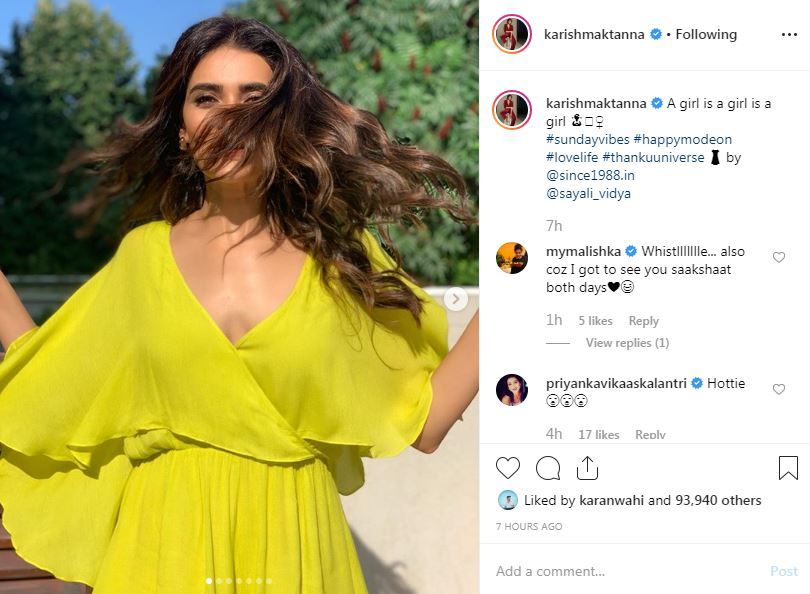 Television actor Karishma Tanna often remains in the spotlight due to her hot pictures. She is one of the sexiest actors and is very active on social media. She keeps posting stylish pictures on her account to entertain her huge fan following on Instagram. Recently, she shared some pictures in the boho-chic look that set the Internet on fire. Seen wearing a long silk wrap dress with a drilled bottom and tie belt, an ensemble from Rajdeep Ranawat, Karishma sizzled in the photoshoots. Her sense of fusion and bohemian fashion that has happened to stand out in the recent past.

On the professional front, Karishma is currently seen playing the lead in the daily soap Qayamat Ki Raat. She also featured in a small role in Ranbir Kapoor starrer Sanju which turned out to be a big hit.