Karma Is a Bitch: This 7-minute-video proves how Karma hits back! (Funny Video)

You sure didn't this coming! 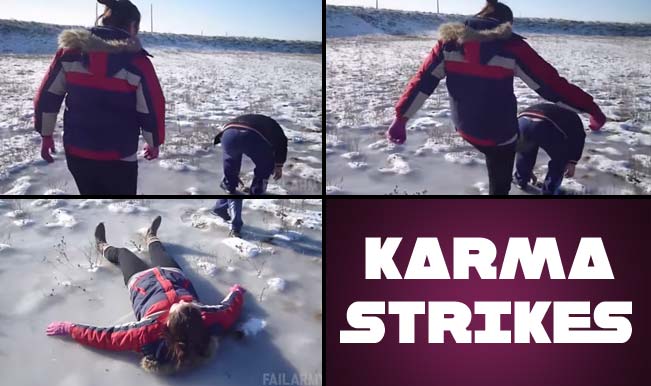 Also Read - 'Don't Ever Talk to The President that Way': Donald Trump Snaps at Reporter Over Election Question | Watch

What goes round, comes around. When people often indulge in a wrongdoing, being ignorant of its consequences, they think that they might get away with it. But, KARMA hits back! It is a popular notion that no matter what the deed — good or bad — he or she will pay its price during the life’s course. Also Read - 'Out of This World': NASA Astronaut Shares Breathtaking Video of Earth From Space, Leaves Twitter Awestruck | Watch

While some feel the heat soon, some are taught a lesson years after they had committed a wrongdoing; because Karma Is A Bitch! This compilation video by ‘Fail Army‘ on YouTube captures some of the amazing, surprising, and funny scenes that sees Karma making a comeback LIKE A BOSS. (Also read: Microsoft CEO Satya Nadella angers women over ‘karma’ pay comment) Also Read - Panic Grips Residents After Leopard Spotted Roaming in Streets of Ghaziabad, CCTV Footage Emerges | Watch

Watch the 7-minute-video titled ‘Instant Karma Fails Compilation’ below and be ready to go ROFL.