The salon is located in the city's One Center Mall where Karni Sena workers had reached to demonstrate.

Indore: After a video went viral and turned into a controversy where renowned hairstylist Jawed Habib spit on a woman head to style her hair, Karni Sena held a protest at a franchise salon of Jawed Habib in Indore on Saturday. However, the salon owner had already changed the name of the shop before the demonstration. The salon is located in the city’s One Center Mall where Karni Sena workers had reached to demonstrate.

Receiving the information of the protest, the Tukoganj police reached the spot. 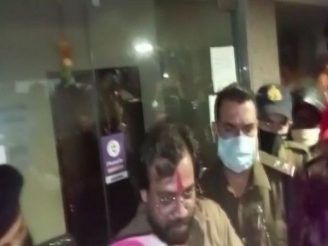 Amit Dantere, the owner of the salon, said, “As the incident sparked row, we have changed the branding of our salon in honour of women. I had taken the franchise of Jawed Habib 6-7 years ago and left the franchise after this incident.”

In the viral video, hairstylist Jawed Habib was seen using his spit to style a woman’s hair during a workshop. The woman was seen sitting on the stage on a salon chair while Habib prepared to cut her hair while giving hair care tips. “Hair is dirty. Why are they dirty? Because shampoo has not been used,” he said.

He later issued an apology saying it was humorous intent. However, he did not apologize to the woman he spitted on. Police have filed a case against Jaweb Habib.