Kaun Banega Crorepati 10 hosted by megastar Amitabh Bachchan found its first crorepati in Assam’s Binita Jain. The mother of two had successfully answered the 14th question and won the mega prize of Rs 1 crore. Along with winning the big amount, Binita also got Mahindra Marazzo car. As they moved towards the last question, Big B told her that it is his honour to present it. However, However, Binita couldn’t answer the question and instead of taking the risk, she decided to quit the game. Also Read - KBC 13 Registration Date, Time Out: Amitabh Bachchan Returns to Host For The 12th Time

Interestingly, after quitting the show, Big B asked her to guess the answer of Rs 7 crore question and she answered it correctly. Also Read - Indian Idol 12: Jaya Prada Reveals How Amitabh Bachchan Used His Burnt Hand As A Style For De De Pyar De

Talking about her experience she said, “I am touched by the humility of Amitabh Bachchan. Being such a huge star, he is so down to earth — the way he interacts with the audience and participants is amazing. I am touched, really.”

She further added, “Never did I ever imagine that I would interact with media and grab limelight for winning a game like KBC. I would say that luck played an important factor in that.”

Expressing her happiness, she said, “Thousands of people are calling to participate in the game show and so many of them just don’t get the phone connection at the first place. That is why they got rejected in a way. Knowledge is a different thing, but getting a platform to show your knowledge is equally important in this case. I cannot thank my luck enough.”

When she was asked about the preparation for the game, she said, “I am not into book reading. But I am an online reading person. So once the final round was confirmed, I started reading online.”

On the related note, KBC season 9 had no contestant who claimed Rs 7 crore but a social worker from Jharkhand named Ananmika Majumdar went home with Rs 1 Crore prize money. 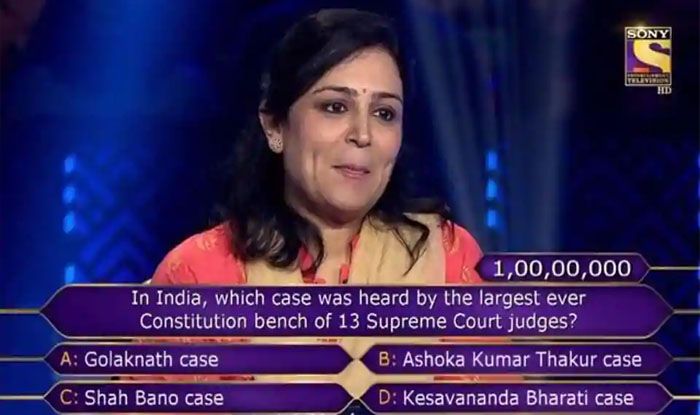 KBC 10 has been able to keep their audiences glued to the screen with interesting questions and Big B’s fun moment with the contestants.

This year, KBC has introduced the feature on the Sony Liv app where audiences can play along with the contestants. On the other hand, Jio customers have a double benefit as they can get a chance to sit on the hot seat facing Bollywood’s megastar, Amitabh Bachchan.