Hussain, who is local businessman said that he choose to do this to express his protest against the CAA.

Vazhimukku: To register his complaint against the Citizenship Amendment Act (CAA), a bridegroom in Kerala resorted to a unique sort of protest. On Monday, Haja Hussain came for his wedding ceremony riding on a camel, holding an anti-CAA poster in his hands. Also Read - 'Nation First': Groom And His Family Decked Up For Wedding, Stand In Queue To Vote in Delhi

Hussain, who was accompanied by a large crowd mostly comprising his friends and relatives, carried a placard which read ‘Reject CAA, Boycott NRC and NPR’, as he arrived at the wedding hall in Vazhimukku, on a camel back. Also Read - Groom Exposes Cheating Bride At Wedding, Plays Video of Her Getting Intimate With Another Man

Hussain, who is local businessman, said that he choose to do this to express his protest against the CAA. That’s not it, he also gave the most unique gift to his would-be-bride–a copy of the Constitution!

“Along with the ‘Meher’ (the custom where the groom hands over gold or money to the bride), I also gave a copy of the Constitution. CAA should be rejected,” said Hussain.

Not just him, many people across the country have used the medium of their wedding, wedding cards, pre-wedding ‘Save the Date’ photoshoots and even their mehendi to protest against CAA and NRC.’

Just a day back, a Muslim couple along with their relatives were seen posing on the stage with posters stating “No CAA, NRC”, the pictures of which have gone viral. 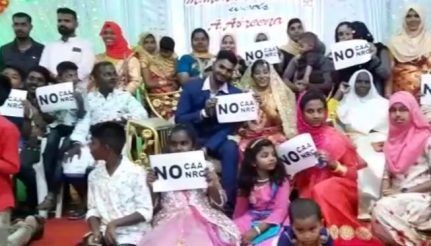 The Citizenship Amendment Bill (CAB) was passed by the Rajya Sabha on December 18, 2019. CAB gives Indian citizenship to the non-Muslims of Bangladesh, Pakistan and Afghanistan.