This promo is all set to make you go wild and crazy as Parineeti shares a lip lock with Ranveer in the pool. 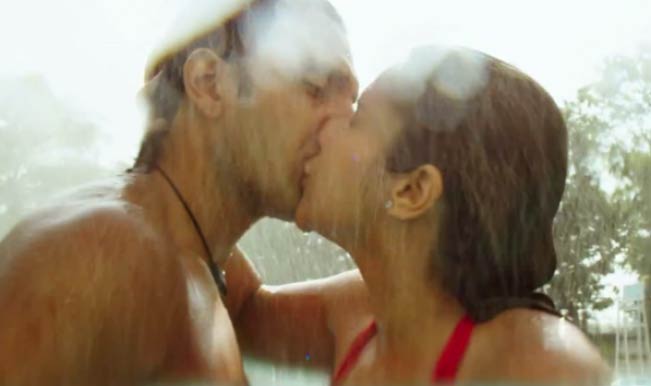 Yet another dialogue promo from Kill Dil has been released. The promo features Ranveer Singh and Parineeti Chopra hitting on each other. This promo is all set to make you go wild and crazy as Parineeti shares a lip lock with Ranveer in the pool. The two sure make an adorable couple and it goes without saying that the sizzling chemistry between the two will blow your mind away. (WATCH: Kill Dill ‘LOL’ dialogue promo: Ranveer Singh and Ali Zafar decipher sms lingo!) Also Read - It's a Girl For Anushka Sharma, Virat Kohli! From Alia Bhatt To Sania Mirza, Celebs Pour In Their Congratulations!

The story of Kill Dil revolves around two killers in North India, Dev (Ranveer Singh) and Tutu (Ali Zafar) who roam free. During their youth, they were abandoned and it was Bhaiyaji (Govinda) who gives them shelter and nurtures  them to kill. In the film, Parineeti Chopra plays the role of a free-spirited girl named Disha. Earlier there were rumours of Ranveer’s alleged girlfriend Deepika Padukone playing the female lead in the film. However, it was later officially declared that the bubbly actress Parineeti had been signed to do the role. (READ: Kill Dil: Why does Bharatiya Janata Party (BJP) want to Kill the release of Pakistan actor Ali Zafar’s film?) Also Read - Deepika Padukone, Ranveer Singh Recount Their Love Story, Say 'Ang Laga De Kiss Was So Intensely Passionate'

The music of this upcoming Ranveer Singh starrer has been carried by Shankar-Ehsaan-Loy and celebrated singers like Udit Narayan and Kavita Krishnamurthy have given their voices for the film. A major chunk of the film has been shot in the capital city, New Delhi. Directed by Shad Ali and produced by Aditya Chopra, Kill Dil is an upcoming Bollywood romantic action movie. This film features Ranveer Singh, Ali Zafar and Parineeti Chopra in lead roles. Kill Dil also marks the comeback of megastar Govinda who will be seen playing a negative role in the film. The upcoming movie is slated to hit the movie screens on November 14, 2014.