Kiss Me, I’m Desperate: Watch a boy getting free kisses from strangers!

Watch a boy getting free kisses from strangers in Los Angelese 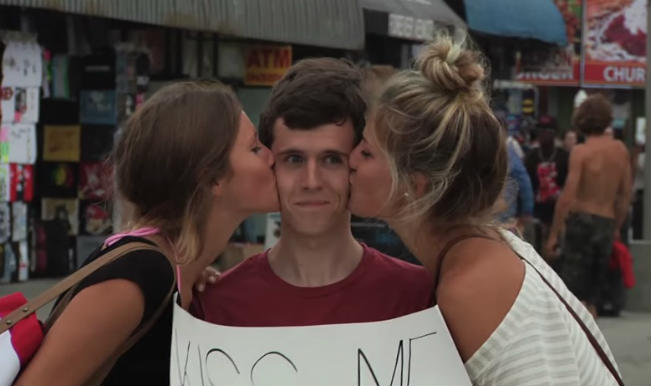 Will standing on the streets of Los Angeles with a poster reading, “Kiss Me, I am desperate” help you get kissed? Well if that just sounded funny, then you must watch the video to believe it. Blake Grigsby did not have to impress the women who kissed him. He simply stood on the street with a placard that automatically attracted girls. He just went around to girls and made a few signs and got kisses. The experiment became a sudden success when the first girl kissed him seeing the poster in his hands which left him surprised. Also Read - Indian Shot Dead by Masked Assailant at Grocery Store in Los Angeles

A few men also approached him curiously, well not to kiss but to ask him if him if his method worked out! Also Read - Trending News Today January 31, 2020: Sonam Kapoor Ahuja-Rhea Kapoor's Sultry Video From Los Angeles Will Leave You Craving For Similar Exotic Getaway

A similar experiment was tried by the students of Champan University’s film school as a part of their projects. In the ad students handed out free samples of chewing gums to random people and then gave away free kisses. Immuno Gum, the product they were promoting.

Watch: The hottest guy and girl from Chapman University give out free kisses to strangers!