Kung-Fu Crane takes on 3 tigers in China and wins the battle! [Watch Video]

The sweet-little standoff came to audience's delight as they all applauded the red-crowned crane's brave effort. 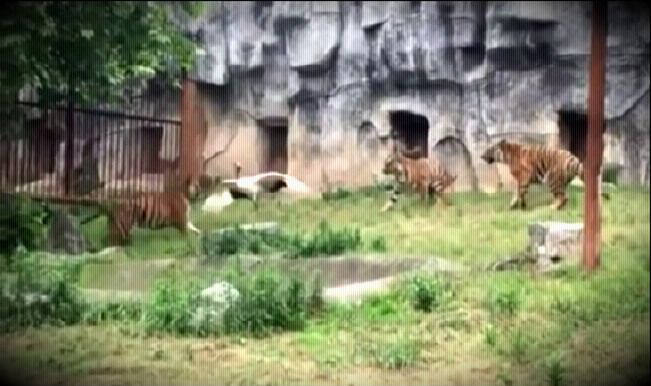 Also Read - China Pakistan Economic Corridor: When China Invested in Pakistan, They Did The Math

To see animals taking on other species in a zoo is a delight to watch. In yet another shocking-cum-surprising video that surfaced on video sharing site Youtube, a red-crowned crane is seen fighting with tigers, not one but three. The visitors at Fuyang Wildlife Park in Hangzhou, China were in for a surprise when they got live visuals of a crane taking on tigers, and eventually winning the three-on-one bout. Also Read - 'We Were Bitten by Coronavirus Infected Bats': Wuhan Scientists Make Startling Revelation in a 2017 Video

After a strong breeze sent a red-crown crane into the tigers’ enclosure, the fate of the crown was all but sealed. With little to fly out and rescue herself, the strong-willed crane decided to ace the roaring tigers. The tigers when found out that the crane is hapless and has no scope of flying out, the trio closed in for a kill, only to find the crane displaying exquisite skills of Kung-Fu! (Also watch: White Tiger Spoof: Youngsters mock the tragic Delhi zoo incident) Also Read - Trump Admin Blacklists Xiaomi, 8 Other Firms With Chinese Military Ties

After repeated failed attempts, the tiger also tried the usual ‘tiring out ‘ technique by chasing the crown in their enclosure, only to find themselves failing again. The crane used moves, which looked straight out of Jackie Chan’s book, to keep all the vying tigers away from her. (Also watch: Full video: White tiger kills mentally unstable man in Delhi zoo)

The sweet-little standoff came to audience’s delight as they all applauded the red-crowned crane’s brave effort. Also, the audience didn’t stop there, as they laughed full throttle on the failure attempts of the tigers.

Watch the full video of Kung-Fu crane braving to keep three tigers at bay, and ultimately win the battle below: