Leopard attacks a 22-year-old in Dooars West Bengal! Braveheart fights off the big cat to become a local hero

Despite being severely wounded, Suman did not let go the hold off the leopard and put up an intense fight.

Imagine a situation of getting attacked by a big cat? What would you do? Your first reaction? Well, we possibly can never think of such an incident, but a lion-hearted 22-year-old (no pun intended) fought off a fierce wild leopard to save his life. The dramatic episode occurred when Suman Roy, a daily-wage labourer, was attacked by the big cat when he was returning from work in Malbazar in the Dooars. ALSO READ: Leopard enters Vibgyor school premises in Bengaluru (Watch Video).Also Read - RT-PCR Report Not Required For Transit Passengers At Kolkata Airport | Latest Guidelines Here

Suman Roy, who lives in Leesh River Tea Estate in Malbazar subdivision of Jalpaiguri was cycling his way back home when he got attacked by the leopard. The animal hiding in tea bush in section 5 of the garden pounced on Suman from behind. Like any other big cats, the leopard targeted Suman’s neck, but the gutsy lad put up a fight. He caught hold off the predator’s leg and started punching on cat’s face. Also Read - BREAKING: Bombs Hurled Again Outside BJP MP Arjun Singh's Home in Bengal

Despite being severely wounded, Suman did not let go the hold off the leopard and put up an intense fight. His struggle for survival continued for 10 minutes till few fellow workers came to Suman’s aid after hearing his cries and leopard’s growls. The wild cat was not expecting such resistance from the boy and fled the spot. Suman who lives with his brother Subhash Roy in Kalagachi labour line was first taken to the health care centre in the tea garden for the first aid and later to the sub-divisional hospital in Malbazar where doctors gave him an anti-rabies vaccine. Also Read - Mamata Banerjee to File Nomination For Bypoll to Bhabanipur Assembly Seat Today

Subhash Roy was quoted by Telegraph saying, “Suman was riding his bicycle through the plantations after work. Suddenly, a leopard hiding in the bush pounced on him. He fell off his cycle as the animal mauled him on the face, back and shoulder.” The incident has earned Suman Roy a tag of a local hero on which his brother further added, “Despite being injured, my brother got up and attacked the leopard. He bit one of its ears and punched hard in the big cat’s face at least twice. The animal got perplexed and fled the spot.” 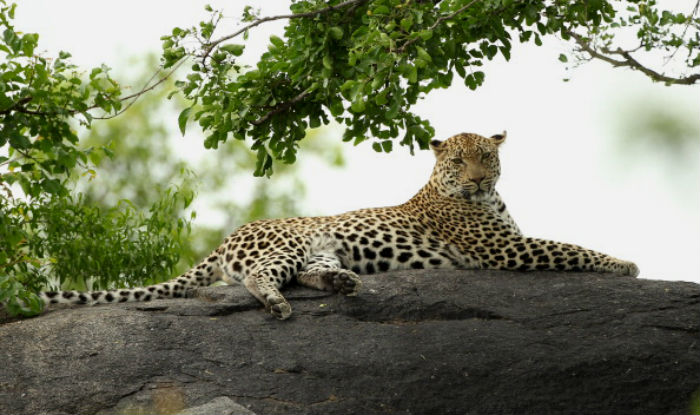 For Representational Purpose Only (Getty Images)

Suman would need some days to recover from the attack as his injuries are grave. The wounds have been bandaged but few days will be necessary for it to heal completely. As for avoiding such attacks in future, a trap has been set to capture the leopard as informed by a forest source. This attack comes in just a week after a leopard mauled a 16-year-old boy. The frequent encounter between wild animals with the tea gardens workers is becoming a cause of worry for the forest officials.