LGBT Pride Month celebrated by Facebook & Google with hidden rainbow reactions and artworks! Here is how you can find it

The rainbow flag, designed by Gilbert Baker in 1978 is being used on a large scale to promote the LGBT community and celebrate pride month.

Internet giants Facebook and Google are known for acknowledging and celebrating various international observances, and as June is celebrated as LGBT Pride month, the companies had to come up with their own way of embracing all sexuality and celebrating them with pride and the rainbow flag. Facebook decided to come up with a new reaction of rainbow flag that is hidden from the world and can be accessed by following certain guidelines. Pride month is being celebrated with a streak of the LGBT flag artwork that is hidden to the normal eyes. These reactions have become a topic of discussion as people who have access to these reactions are using it on a wide range to react to everything from pro-LGBT posts and shower them with love to protesting against homophobic people by showering their page with rainbows. Also Read - Nepal to Send New Map to India, United Nations; Here's Why The World Body Won't Recognise it 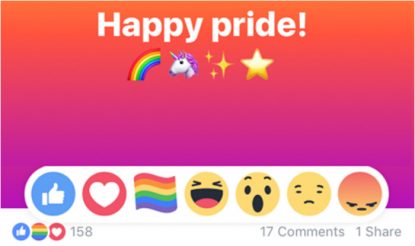 The rainbow reaction that celebrates the LGBT community and marks the Pride Month celebrations cannot be viewed by everyone. The first step to seeing the reaction is to like the LGBTQ@Facebook page and show your support to the community. Once the official Facebook page that supports all sexes is liked the reaction mostly shows up alongside the like button and can be used. However, in some cases, it takes a little longer for the reaction to show up. In addition to this, a few people were not able to get the reaction at all, and these sad supporters shared this issue with the page. “We appreciate your interest in the Pride reaction. This isn’t yet available in some areas, but we hope to roll it out in more soon. Happy Pride! “ the page responded.

2. How to see Google’s artwork on pride month? 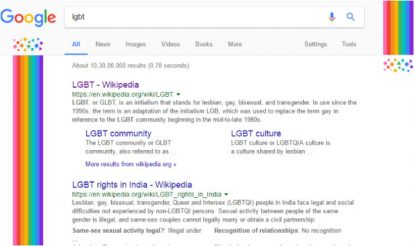 The Google artwork appears on the side of a google search and can be viewed when you search for anything about the LGBTQ community or pride month. For example, if you search for gay pride, the search result will be accompanied by a colourful rainbow artwork flowing on the side of the screen that shows the search results. This simple effort makes the entire made more bright and beautiful and will bring a smile on any LGBTQ supporter’s face.

3. What else can I do to show support for Pride Month? 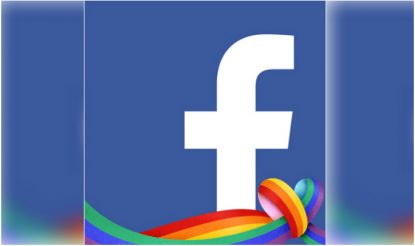 In addition to the reactions that is available in various parts of the world, Facebook also offers a profile photo frame with the rainbow flag that can be used by people on the social media giant. The rainbow lace turns into a bow and brightens up your profile pictures with the colours of pride and looks beautiful. You get the Facebook Profile Photo here and celebrate pride with Facebook.

LGBT pride is a positive stance against the discrimination and violence that the LGBTQ community face from haters. The Facebook reaction is being used by supporters on homophobic posts to silently protest against this discrimination. We hope that these initiatives help in promoting the rights of LGBTQ community and establish equal rights for all. Happy Pride!