Lunar New Year 2021: Ushering in Year of The Ox | All About Its Date, Significance And Celebrations

Bidding farewell to the Year of the Rat, the Chinese New Year is finally here and will be celebrated around the world on February 12 this year. The festival which begins on Friday, ushers in the second animal on the Zodiac with the second new moon after the winter solstice. 2021 is a Year of the Ox according to Chinese zodiac. The dates change every year because the festival is based on the Chinese Lunar Calendar. Also Read - China Lunar Mission: Chang'e-5 Orbiter-Returner Enters Moon-Earth Transfer Orbit

The Chinese New Year also known as the Lunar New Year or Spring Festival lasts for 16 days, starting from Chinese New Year’s eve to the Lantern Festival. The festival is also celebrated across several countries and other territories in Asia, including South Korea and Singapore.

The year of the Ox

February 12 marks the first day of the xin chou year, or Year of the Metal Ox under the Lunar New Year sexagenary cycle. Explaining the significance, Hong Kong-based feng shui master Thierry Chow told CNN that the ox is a hardworking zodiac sign that signifies movement.

“So, hopefully, the world will be less static than last year and get moving again in the second half of the year,” she said.

Notably, the lunar calendar is also associated with 12 animal signs in Chinese zodiac, so every 12 years is regarded as a cycle. 2021 is a Year of the Ox, while 2022 will be a Year of the Tiger. The other animals are rat, dragon, snake, horse, rabbit, sheep, rooster, monkey, dog and pig.

In China, the celebration kicks off on New Year’s Eve with a family feast called a reunion dinner full of traditional Lunar New Year foods, and typically ends with the Lantern Festival. In a bid to start afresh, people clean their houses, and adorn it with decorations like massive lanterns. Just like Thanksgiving, the festival gives a chance to people and their families to come together during which they enjoy hearty meals and enjoy firecrackers. Beating drums and striking gongs, dragon and lion dances, are organized during the festivities.

“It’s a very joyful holiday (when) you’re supposed to go home, see your family. In China, they celebrate it for two full weeks, and people actually travel home and from far, far away,” author Vickie Lee told USA Today.

The menu is carefully chosen to include dishes associated with luck, including fish, puddings and foods that look like gold ingots (like dumplings). During this period, government offices, schools, universities, and many companies stay closed, giving people ample time to celebrate the festival with their families.

To usher in the new year, Google is also celebrating the occasion with fireworks! Just type in Lunar year 2021, and see what happens! 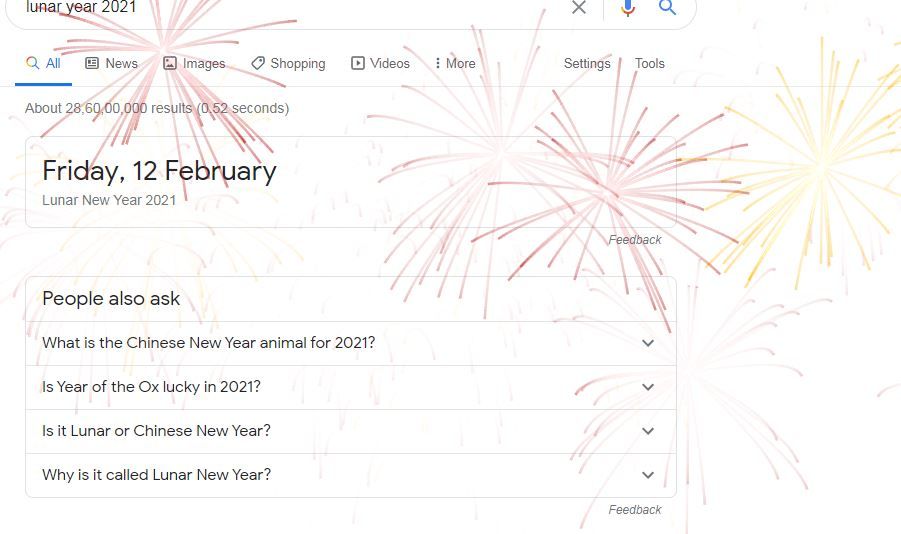