Mahatma Gandhi’s speech on non-violence in Geneva: Rare video footage of his struggle for freedom!

Gandhi says Indians could resort to violence if they needed to. 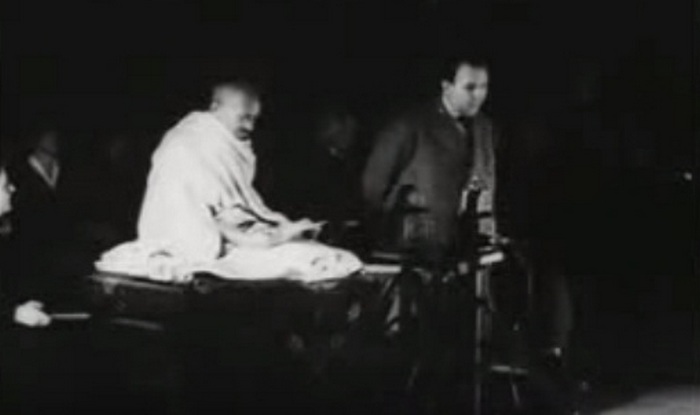 Mohandas Karamchand Gandhi was born on October 2, 1869, in Porbander. The barrister who worked in South Africa came back to India and revolutionised the freedom struggle with his unique ideas of ahimsa or non-violence and satyagraha or the quest for truth. His birthday is a national holiday in India, celebrated as Gandhi Jayanti. On this occasion, we share a video of a rare speech of Mahatma Gandhi in Geneva, with a live recording! Also Read - Hindu Mahasabha to Launch YouTube Channel on Nathuram Godse to Tell Youth About 'Good Work' Done by Him

Archives say Gandhi delivered this speech at the Victoria Hall, Geneva in Switzerland on December 10, 1931, with the help of an interpreter. It is for the first time that Gandhi talks about the fact that Indians could resort to violence if they needed to. Also Read - Burj Khalifa in Dubai Displays Mahatma Gandhi's Images on His 151st Birth Anniversary

Here’s what Mahatma Gandhi says in his speech, “I regard myself as a soldier, though a soldier of speech. I know the value of discipline and truth. I must ask you to believe me when I say that I have never made a statement of this description that the masses of India, if it became necessary, would resort to violence.”

“I regard myself as incapable in my lucid moments of having…err…in making a statement of this character. It is complete independence that we want,” he emphasises.

Watch this rare footage of the real Mahatma Gandhi!