Actor Ayushmann Khurrana‘s latest release Article 15 is winning plaudits for its hard-hitting content, but the film has literally received a very soft tribute. Dairy cooperative Amul took to their social micro-blogging site Twitter to post a new advertisement in which the iconic Amul girl is seen standing next to a toon version of Ayushmann’s cop avatar from the film, in front of a police jeep.Also Read - No Board, Only Breakfast: Amul's Topical After Centre Cancels CBSE Class 12 Board Exams 2021

Ayushmann and the film’s director Anubhav Sinha, were touched by the gesture of the dairy brand, which has been famous for celebrating defining moments across various walks of life down the decades through its advertisements.

Sharing the photo on Instagram, Ayushmann wrote, “This is special.” 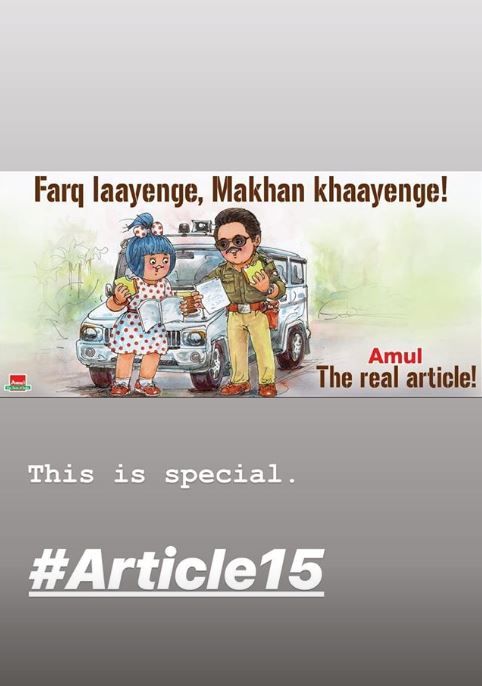 A secret dream fulfilled. Thanks AMUL!!!

Article 15 also features Isha Talwar, Sayani Gupta, Kumud Mishra and Manoj Pahwa. Article 15 of the Indian constitution prohibits any kind of discrimination on the basis of religion, caste sex, race and the place of birth. In the film, Ayushmann plays the character of a cop in the Indian state of Uttar Pradesh who investigates a murder case and ends up unravelling the deep roots of discrimination in the society.