The show that garnered 4.1 million television viewers, just started to get a little excited about this never-seen before act, when Paul Rosolie 'freaked out'. 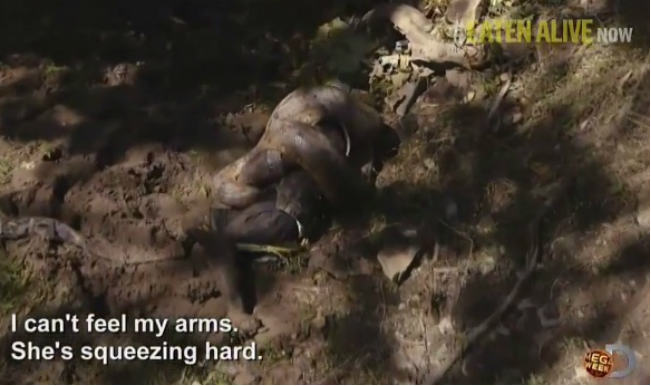 Also Read - Into The Wild With Bear Grylls: Akshay Kumar to Divulge Himself Into Adventurous Action | Watch Teaser

“Guys you need to get in here… I’m calling it. I need help”. These were the words of Paul Rosolie who dared to become the first one to allow himself being eaten alive by a massive anaconda. But obviously the plan of both Paul Rosolie and Discover Channel that aired their new show with brand new concept ‘Eaten Alive’ fell flat as the brilliant idea of Paul Rosolie, of taking a tour to Anaconda’s belly for Discovery Channel’s special show ‘Eaten Alive’ were literally squashed by the giant  25-foot, 250 pound green Peruvian anaconda.For, 27-year-old naturalist, author and film-maker, this idea of getting himself eaten alive  by a massive anaconda, came as a harsh reality when one thinks of messing with the jungle laws. Paul Rosolie, who shocked the world with his idea of getting swallowed by the mightiest snake species of this planet for Discovery Channel’s two-hour special show ‘Eaten Alive’ that aired on December 7. Also Read - Discovery Launches Dance Challenge Ahead of 'Into The Wild With Rajinikanth' Telecast

The video footage of the inside of anaconda’s mouth is even more terrifying that Paul Rosolie, who hit headlines for willingly becoming a meal of an anaconda, set with his crew for the unbelievable task in the deep rainforests of Amazon. His idea of doing this deadly stint was to attract attention towards the dying Amazon rainforests, the natural habitats of these giant anacondas. Hence, as planned, Rosolie in his special snake-proof suit sprayed with pig-blood attracted the ‘She-Conda’ as a tempting, delicious meal. Well, the lady anaconda was not initially interested in eating her ‘made-up’ hearty meal, but finally gives in for the food! Also Read - PM Modi to Feature in Discovery's 'Man Vs Wild' TV Show, WATCH Trailer Here

The show that garnered 4.1 million television viewers, just started to get a little excited about this never-seen before act, when Paul Rosolie ‘freaked out’. With not more than two minutes of Rosolie’s head inside anaconda, did the environmentalist started feeling the might of the snake. Paul alerted his crew members monitoring from the sidelines to bail him out of the clutches of his death.

Paul was heard saying that he could feel “the suit cracking” and his “arms ripping out of their socket”. He knew the condition has worsened when he felt his bones have started to break! At this moment, Paul called in a rescue team, saying “Guys you need to get in here… I’m calling it. I need help”. And the team appeared to lift the snake off Paul and pulled it off after good struggle. Paul Rosolie has been reported of suffering from multiple injuries due to massive constriction by the Great Anaconda! Watch this horrific video that will show Paul Rosolie’s struggle for those two horrific minutes.