3 Key battles of the Capital One Cup third round clash between Manchester City and Sheffield Wednesday. 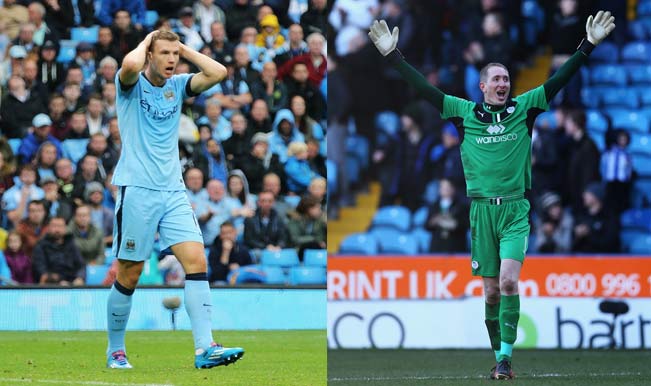 Manchester City take on Sheffield Wednesday in the third round of the Capital One Cup 2014-15 fixture at the Etihad stadium on Wednesday night. Manuel Pellegrini’s side eased past Sunderland to lift the trophy last campaign and the Chilean will be eager for his players to perform better this season. Changes could be expected from both sides as they will have their respective Barclays Premier League and Football League Championship action coming up in the weekends. Also Read - I Don't Want Lionel Messi Anywhere Near Premier League: Liverpool Star Andy Robertson

Click here to read the preview and team news of the match; live streaming details and probable lineups will be available here. Based on the predicted starting XI, here are three (potentially) key battles which we believe could alter the outcome of this clash. Also Read - Lionel Messi Transfer: Argentine Superstar Now '90% Likely to Stay' at FC Barcelona

Man City signed Mangala last summer from FC Porto but the French international has only started one match, which was against Chelsea last Sunday. The 23-year-old centre back could start once again and will potentially face the attacking pair of Hallam Hope and Atdhe Nuhiu. The latter is Sheffield Wednesday’s top scorer this season with four goals, two of them coming in the Capital One Cup.

Mangala was up against a partially unfit Diego Costa at the Etihad and only complacency on his part could allow the 25-year-old Austrian to get his name on the scoresheet once again.

Sheffield Wednesday’s defensive midfielder Jose Semedo has a huge task of nullifying Man City’s creative side which could be spear headed by Nasri. The 27-year-old has been one of Man City’s regular players with pace as well as skill to play down the middle or on the wings. Semedo has been plying his trade with the Owls since 2011 and notched up over 100 appearances in the three seasons.

On paper, Nasri is clearly the better player but should Semedo spring up a surprise the former Arsenal star could find it difficult with the Portuguese player attempting to prevent him from creating or find a scoring opportunity.

Due to lack of strikers available at Pellegrini’s disposal, Edin Dzeko could lead the attack on his own with Scott Sinclair, Samir Nasri and Jesus Navas providing him with the opportunities to score. Chris Kirkland could assume his place in goal for Sheffield Wednesday, having started the last two matches during the victories against Notts County and Burnley in the first and second round respectively.

The former Liverpool and Wigan Athletic shot-stopper made four good saves to deny Burnley the opening goal and maintain a clean sheet as Atdhe Nuhiu hit the only goal of that match. But Dzeko poses a completely different challenge for Kirkland and how will the 33-year-old manage to evade Man City’s exhilarating attack remains to be seen.