From the pain of filing income tax returns to meeting targets to get the much-awaited appraisal, the end of March brings various stressful experiences for people.

March Closing is here as he Financial Year 2016-17 has finally come to an end. After surviving various struggles like Narendra Modi’s currency demonetisation and international disturbances like Brexit, the Indian economy has emerged out vitorious, however the state of employees and businessmen is still stressful. It is therefore a common ritual to send some good old March ending jokes. While people are extremely stressed with their struggles of meeting the targets and filing taxes, forwarding March Ending Jokes, quotes and SMSes on social media websites like Facebook and Twitter. People also enjoy sharing WhatsApp messages of jokes on account closing, financial year ending and March ending.

As the trend continues, we cannot help but join the bandwagon and spread the positivity with our friends and family. While there are many who have grown sick of the old March Ending jokes that have been shared and re-shared over the years, other creative geniuses are busy coming up with new jokes and quotes on March ending. Here is a list of jokes and quotes on tax raids, filing income tax, financial year ending and other hilarious topics that are only discussed in March to share with your friends and family! 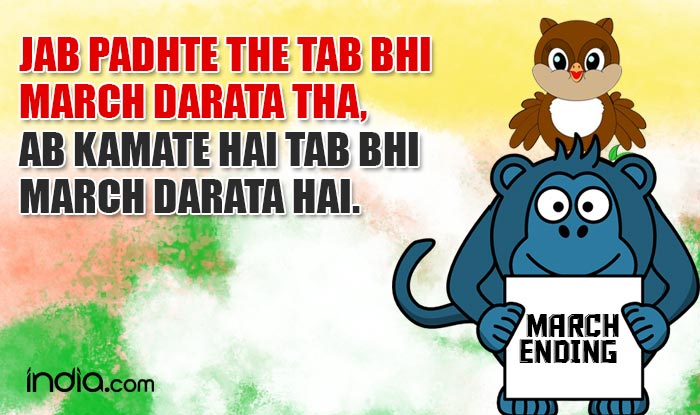 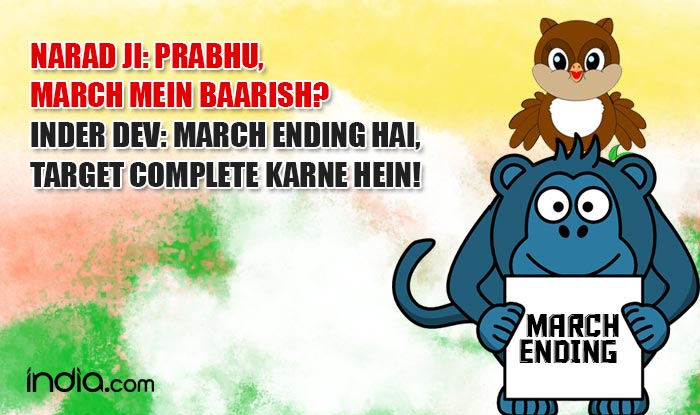 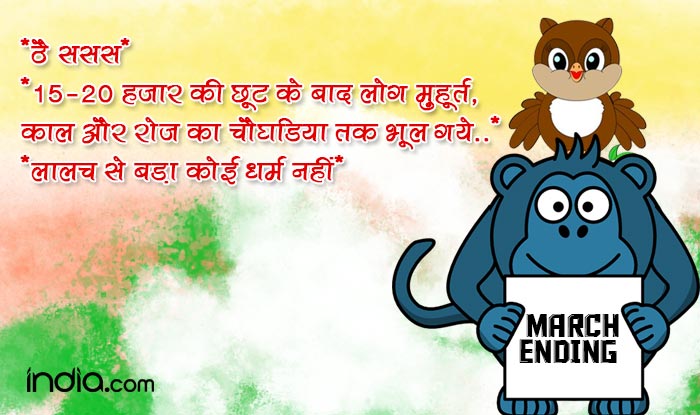 WhatsApp Reads: Australia can’t even imagine what Indians can do to achieve target in March ending! 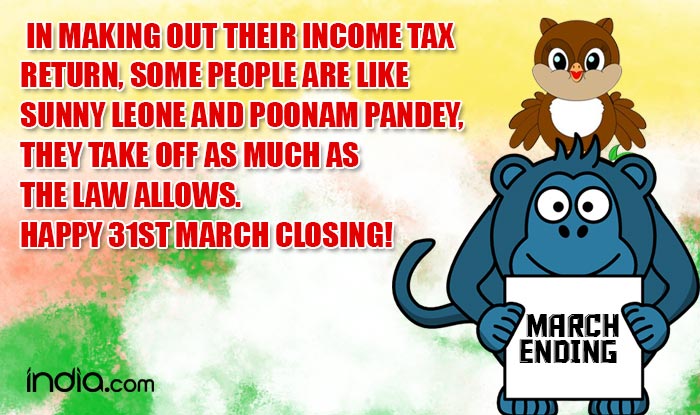 WhatsApp Reads: In making out their income tax return, some people are like Sunny Leone and Poonam Pandey, they take off as much as the law allows. Happy 31st March Closing! 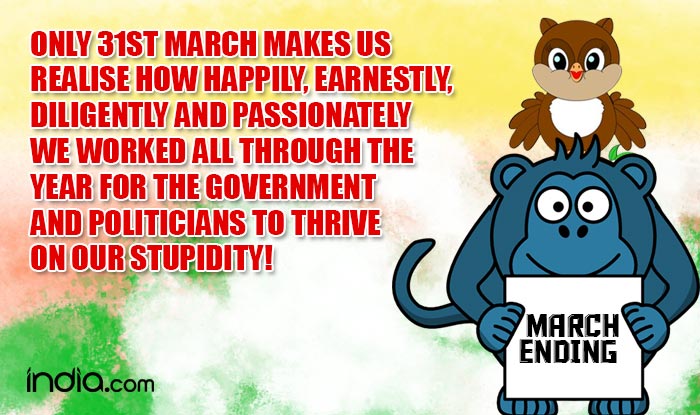 WhatsApp Reads: Only 31st March makes us realise how happily, earnestly, diligently and passionately we worked all through the year for the government and politicians to thrive on our stupidity! 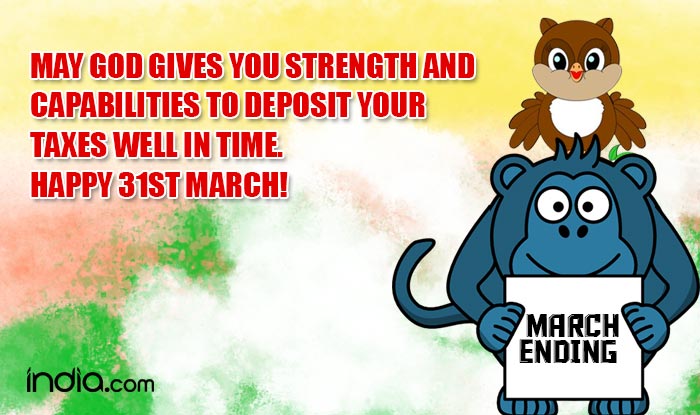 WhatsApp Reads: May God gives you strength and capabilities to deposit your taxes well in time. Happy 31st March! 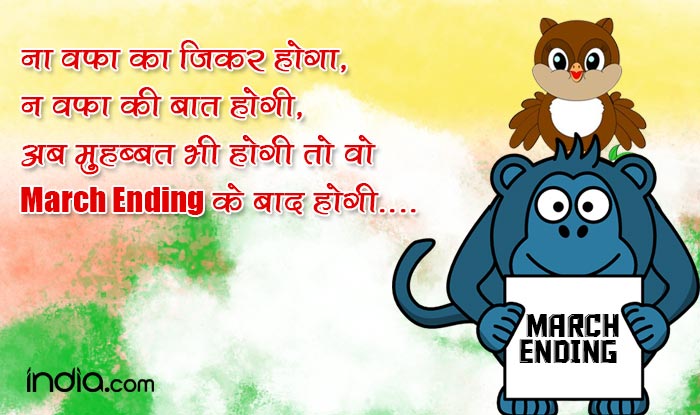 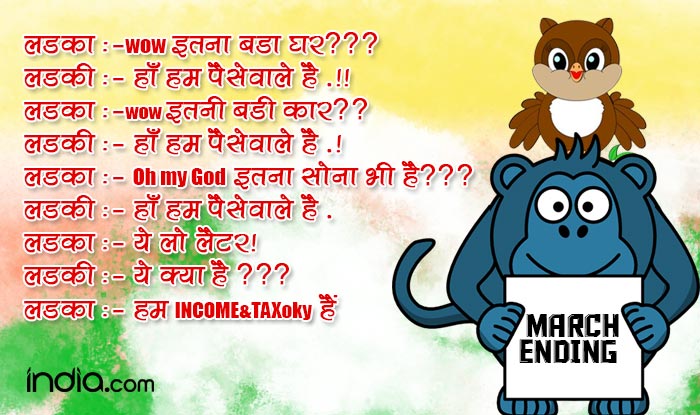 WhatsApp Reads: After the war between Ravana and Rama, The Auditor in Bill Section raised 3 objections
1. Hanumanji did not take prior permission from the appropriate authority (Bharat), the King of Ayodhya, during the relevant time for his travel
2. Hanumanji being a Grade 2-officer was not entitled to air travel;
3. Hanumanji was asked to bring Sanjeevani Booti, just a single plant, but he carried a whole mountain (unauthorized excess baggage).

The Auditor returned the bill. King Ram could do nothing except marking it for re-examination. A worried Hanumanji approached the Auditor and offered a bribe of 20% of the T.A.Bill amount. The Auditor now wrote on the Bill, Re-examined
1. Even during the relevant time, Ram was still the king through his Paduka and as journey was performed on Sri ram’s instruction, it is acceptable.
2. Further in an emergency, non-entitled officers can be authorized ex-post facto to fly.
3. Also excess baggage is justified as bringing a wrong plant would have entailed multiple journeys with extra cost; hence bill may be paid.
Ram ji shocked !! That’s Accounts department. 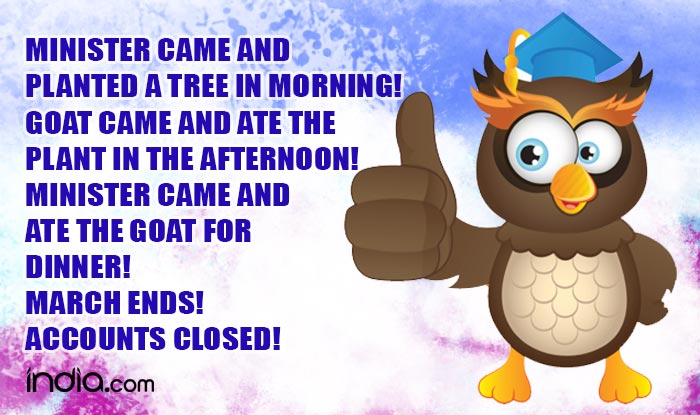 We hope that the jokes and SMSes come in handy for you to spam your friends and families’ inbox. While the stress around March is extremely daunting, it is important to take time out and share a laugh. While the jokes on March 31 are endless, we surely hope that the financial year end brings you a better luck and that you file your taxes and clear your dues. Here is wishing a Happy March ending to one and all. (Pictures Designed By: Jyoti Desale Pashte).