The latest insensitivity of the internet can be seen in the comment session of Facebook CEO Mark Zuckerberg’s latest post. In the post, Mark congratulated his sister Randi Zuckerberg for winning two Tony Awards for her Broadway musicals. Though it was not the post that took netizens attention but the name of her sister that invited misinterpretations and the post has gone viral for all the wrong reasons. Also Read - Facebook Suspends Donald Trump's Account for Two Years

The post has garnered 30,000 comments, 1,78,000 likes and 47,000 shares so far. Ever since Mark has shared the post on Facebook, netizens started trolling him as well as his sister by misinterpreting his post dedicated to Randi Zuckerberg. Not only this, but comments are full of filth and most of them are offensive. It is not that netizens failed to understand that Randi is Mark’s sister but the trolling was falsified on purpose. Also Read - Australia Passes Landmark Law to Make Google, Facebook Pay For News

One user wrote, “I just googled the meaning of Randi in India and boy oh boy 😂… I understand why this post gat people from that side all excited… I think I would feel the same way too if I were Indian… Anywho Congratulations Randi” while the other commented, “For a second i thought someone hacked Zuckerberg and post inappropriate things.” 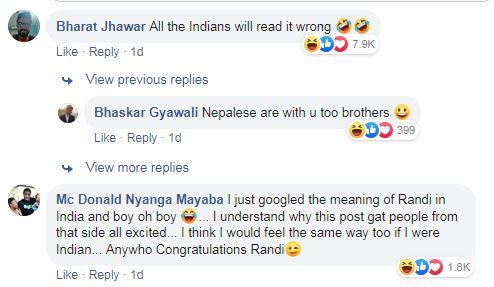 For the uninitiated, Mark Zuckerberg co-founded Facebook in 2004 and is also a board member of the solar Spacecraft development project Breakthrough Starshot.