This trailer is a must-watch and it is indisputably the best trailer of the Avengers: Age Of Ultron movie. 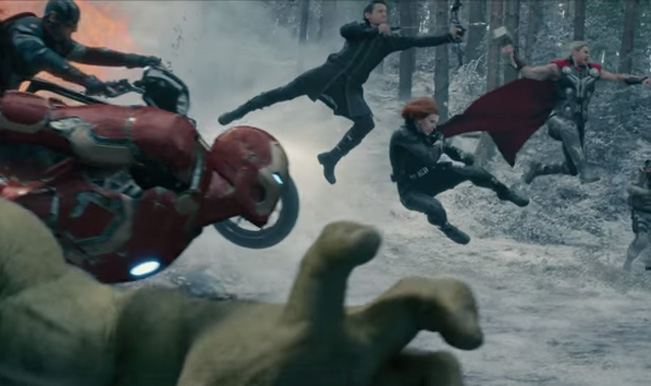 This trailer is a must-watch and it is indisputably the best trailer of the Avengers: Age Of Ultron movie with at least a second of focus on each character who plays a pivotal role in the film. Tony Stark aka Iron Man is the first to make a big entrance when Maria Hill (Cobie Smulders), expecting Nick Fury at the helm of the ship says that everything is set to find Robert Downey Jr. in his chair as he explains that he is just the man who pays and designs everything while making everybody look cooler. Classic Tony Stark! Also Read - Wakanda Forever! Marvel Universe And Chadwick Boseman's Co-Stars Pay Tribute to Their King in Heartwarming Tweets

During a casual team meeting, Ultron makes his first entrance and shock the Avengers who are threatened of not being equipped to be able to stop the creation and child of Artificial Intelligence. Nick Fury deploys his team to fight the evil that was created for the benefit of the human race. The Avengers who are shown one after the other in epic scenes from a fight with Ultron and his forces is what makes this trailer the best of the lot. Also Read - 'I am Gonna Track Down Your Address': Captain America AKA Chris Evans' Message to 6-Year-Old Hero Who Braved Dog Attack to Save Sister | WATCH

Ultron doesn’t just have an army of drone robots, he also has Scarlet Witch and Quicksilver at his command. Scarlet Witch seems to be able to shoot plasma bolts out of her hand like David Stutler (Jay Baruchel) was able to do in The Sorcerer’s Apprentice (2010). Quicksilver is Ultron’s version The Flash. The Flash is a character from DC Comics and Marvelhas his nemesis  and he is Russian, apparently in the trailer.

The previous trailers have all been really good and have successfully been able to captivate us all but the latest trailer which is a TV spot has some of the best scenes from the film which makes it such an incredible trailer. The Avengers initiative itself is amazing like The Justice Leage where a band of superheroes come together forgetting their differences for the greater good and preservation of the world from all kinds of enemies. Watch the trailer of Marvel’s Avengers: Age Of Utron here.