Meet Har Parkash Rishi, the man who removed all his teeth for a Guinness World Record!

Har Parkash Rishi has managed to set a total of 20 World Records in his 74 years. He is so in love with setting records and so famous for his tactics that he has actually been called the Guinness Rishi!

People seriously go to great lengths for fame and while some of them choose the easy way out, for some, they go all the way and work really, really hard. We Indian love fame and setting records and it comes as no surprise when we see them winning at even the number of entries in the Guinness World Records. While initially, it was all about getting their name in the Guinness World Records book, now it is getting online and getting that fame. Recently, we saw a Hyderabadi man set the record for the most hugs given in a minute (79 whopping hugs!) and though he got majorly trolled online for the way he gave the hugs – which looked more like chest bumps then hugs.Also Read - Hyderabad Girl Makes World's Largest Painting By Feet; Hopes to Make it to Guinness World Records

[ALSO READ: This beautiful love story will tell you what true love is and bring tears to your eyes]

But then, if you thought the hugging guy was bizarre, what will you call Har Parkash Rishi who actually removed all his teeth for a record?! No, we kid you not. He removed each and every one of them! And what was that record? It was actually not for one but for 2 records: the first record was that of stuffing the maximum number of straws in his mouth and the second record for stuffing maximum burning candles in his mouth! He actually managed to stuff complete 496 straws in his mouth and also, 50 burning candles! However, his aim was to manage stuffing 755 drinking straws but he could manage a little over half of his aim. Still, imagine the guts and the bravery you need for such an act!

[ALSO READ: These kids are forced to trek a 2600 ft mountain daily just to get to school!] 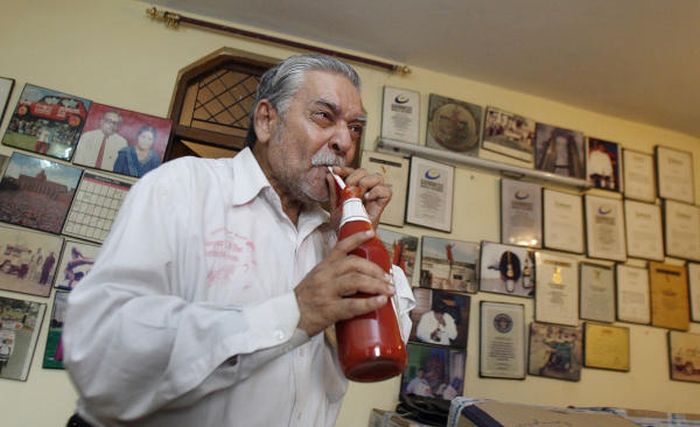 But then, these are not the only 2 records that Har Parkash has set. His love for setting records began at a young age and he tries setting as many records as possible. Har Parkash Rishi has managed to set a total of 20 World Records in his 74 years. He is so in love with setting records and so famous for his tactics that he has actually been called the Guinness Rishi! An auto-parts manufacturer by profession, he set his first record with 2 friends for riding a scooter for 1001 hours! He has quite a few other weird records to his name – like finishing a bottle of ketchup in less than 40 seconds! Why, the man has even delivered pizza seven seas away for a record. Har Parkash or Rishi as he is fondly called once managed to deliver a pizza from Delhi, India to Ripley’s Believe It or Not Museum in San Francisco, California! Well, we wonder just how palatable that pizza was…

[ALSO READ: Abdul Wajid, a jobless village boy built a plane to prove that he is not worthless!] 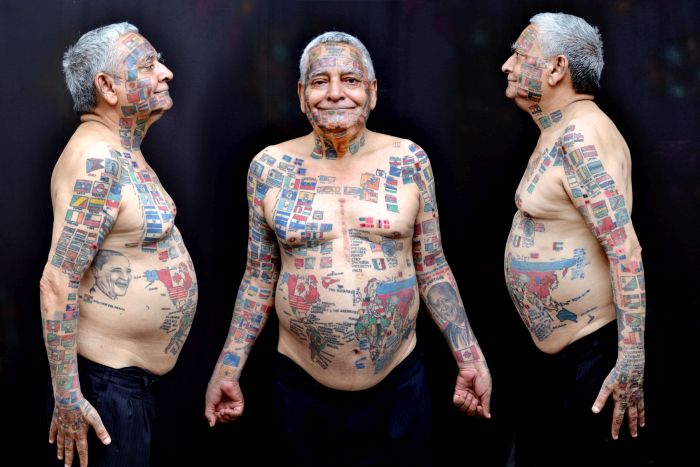 The man even has a total of over 200 flags tattooed on his body – over 49 of them on his face and head! But if you thought that was all, he has now exhausted the country flags he wished to tattoo and has progressed to world leaders instead! He has already tattooed our Indian Prime Minister Narendra Modi, Mahatma Gandhi, Barack Obama, Queen Elizabeth on his body and is now on the hunt for other leaders. But then, if you thought that was his toughest record, then he’ll only be happy to prove you wrong. According to him, the toughest was the straws record for which he had to get all his teeth extracted – no easy task that! What’s more, he’s even gotten his family addicted to his obsession and his wife too holds a record – for the World’s Shortest Will – All To Son!

So, when’s you setting your crazy record?