Yes, 'Tis the Season, and the search engine giant Google is celebrating Christmas with a short-yet-cute movie as its 'Doodle'. 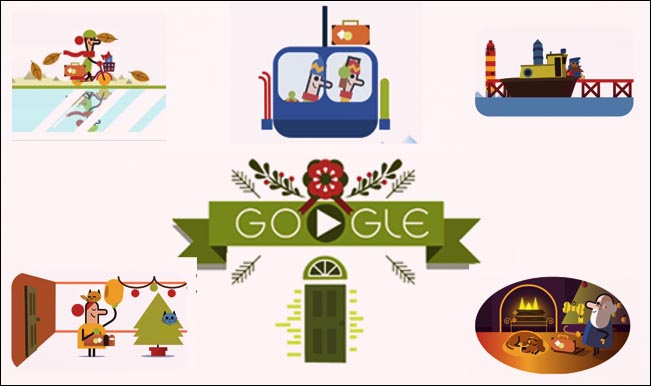 December 25 is here and the celebrations for the biggest festivals for the people of Christian community have begun globally. Yes, ‘Tis the Season, and the search engine giant Google is celebrating Christmas with a short-yet-cute movie as its ‘Doodle’. Also Read - Making India Proud! From Parag Agrawal to Sundar Pichai, 10 Indian-Origin CEOs Who Are Heading World's Biggest Companies

As soon as one lands on the homepage of Google, it will see the door dressed in green colour which resembles the colour of the X’mas tree. The video takes you through a lovely journey beginning with a child who ages through the video (doodle) and finally ends being a grandpa hanging a gift for its pet. The latest ‘Google Doodle’ has perfectly depicted the beginning of ‘Happy Holidays’. Also Read - Era of Machines! Robots Now Wipe Tables, Sort Trash & Open Doors at Google Offices

Google’s latest doodle is a motion doodle, in which a child begins from skating on the road, and ends up being a boy who is cheerfully riding a bicycle in the park. As the doodle progresses, the bicycling boy becomes a man riding an ice-skeeter. The amusing Google doodle then shows the man to be a family man on the ice-mountains with his family cherishing the cold weather. After the adventurous tour in the mountains, it is a sea voyage. The brief video takes the user to various stages of man’s life in an eventful journey.

The cutest part of the latest Google Christmas doodle is that the man is mow a grandpa and visits her grand-daughter’s house. It doesn’t ends there, as the generous grandpa hangs a bone as Santa’s gift for the dog (pet) that is sleeping besides the warmth of chimney.

The delighting ‘Christmas Google Doodle’ is the third doodle by the search-engine company in three days. On the eve of Christmas, the doodle depicted a young man in beards dressed in red suit dragging his sleigh, the same way a Santa Claus pulls his gifts-filled reindeers. The first doodle by Google marked the beginning of the festivities to come in next few days. The motion-doodle showed little children waving hands from the sleigh, which is driven by a Santa Claus who has descended from the moon.

Christmas 2014 is finally here and the season of long holidays has finally begun. The holidays extend till the New Year and people of age groups celebrate and enjoy the winter vacations with much joy and cheer.

We at India.com wish you and your family a Merry Christmas 2014!