Ira said Chetan lied to his 12.3 million followers when he accused her of wanting to kiss him.

The #MeToo movement in India is seeing a good number of stories coming out against very well known personalities, and while there have been claims of sexual harassment, there have also been counter claims and denial of any wrong doing. Author Ira Trivedi, who had accused Chetan Bhagat of sexual harassment, has now filed a legal notice against him for trying to malign her image. Also Read - Slumdog Millionaire Actor Madhur Mittal Accused of Sexual Assault Charges, Says 'Untrue, Extremely Disturbing'

Ira said that Chetan lied on Twitter to his 12.3 million followers when he accused her of wanting to kiss him, and that the one tweet from him has caused her a lot of distress as she was trolled for it. Chetan had, after being accused of sexual harassment, posted screenshots of an email that Ira had written to him in 2013, saying that she had wanted to kiss him. Ira had concluded the email with ‘Miss u kiss u’. Also Read - Evan Rachel Wood Accuses Rock Singer Marilyn Manson of 'Horrific Abuse', Four Other Woman Alleges Same

Releasing the email that she had written to him, Chetan said in his tweet, “So who wanted to kiss whom?”. Check his tweet out below: Also Read - After Jiah Khan’s Sister, Sherlyn Chopra Accuses Sajid Khan of Sexual Harassment

So who wanted to kiss whom? @iratrivedi’s self-explanatory email from 2013 to me, esp last line, easily shows her claims from 2010 are false, and she knows this too. This mental harassment of me and my family has to stop. Please don’t harm a movement with #fakecharges #harassed pic.twitter.com/SWeaSCfHLd

After he posted the screenshot of her email, Ira decided to bring out the mail trail of the conversation she had with him to clear her name, and filed a legal notice charging him under various Sections of the Indian Penal Code. She also alleged that he tried to malign her image by bringing out the email that she had written to him. 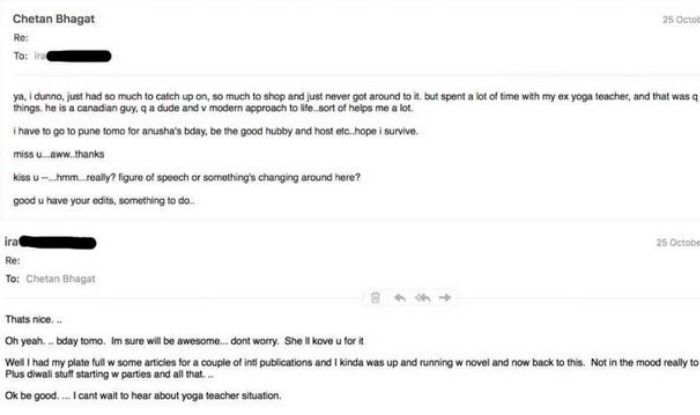 “I have used many salutations to end messages. These include ‘xoxo, x, love, love u, miss u’, emojis and many more including ‘miss u kiss u’. It is a figure of speech,” she said.

She said when Chetan questioned her about the ‘Miss u kiss u’ at the end of her email, she purposely did not reply as she considered it a figure of speech and nothing more.

In a conversation with Mirror Now, Ira revealed that after she had accused him of sexual harassment, Chetan had written an apology on Twitter and mentioned that it would never happen again. She said that after she received the apology, she decided to let the matter go.

But now after facing allegations of trying to smear the #MeToo campaign, she decided to take legal action and released the full mail trail of her chat with him.