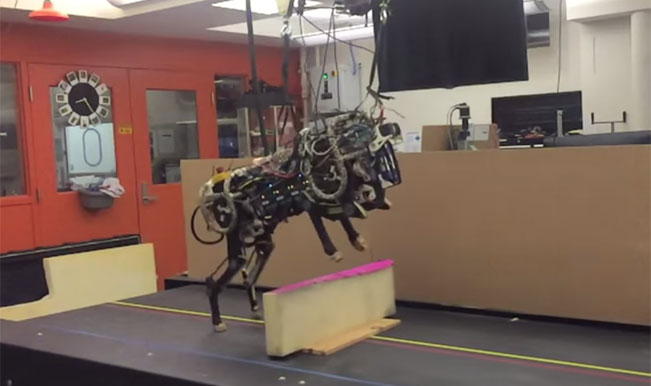 The world of robotics has seen tremendous developments in the recent past. Back in 2012, Boston Dynamics had earlier uploaded a video showing a robot Robot Cheetah sprinting slightly faster than 100m world-record holder Usain Bolt. The Massachusetts Institute of Technology (MIT), known for producing some top class engineers, too are working on a robot cheetah. Last year, researches Hae-won Park, Patrick Wensing, and Sangbae Kim had uploaded a video on YouTube but its jumping ability was not developed to a great extent. Also Read - MIT Scientists Discover New Earth-Sized 'Pi Planet' That Orbits its Star in 3.14 Days, Isn't Hospitable

In a little over eight months, they have now bolstered the running jump ability with the help of laser scanner and three algorithms. According to the report in the MIT news website, the robot cheetah spots the obstacle using a light detection and remote sensing technology called LIDAR. The robotic cheetah courtesy of the improvements is now able to see and jump over hurdles while making runs and does so autonomously. The system allows the robot to scan the distance of the arriving object and then time its jump accordingly. Also Read - Harvard, MIT File Lawsuit Against Trump Administration Over Visa Row For Foreign Students

There are three algorithms that enable the robot cheetah to perform its task without assistance. The first enables it to spot the height of the object that is approaching as well as the distance. The second algorithm is activated as the hurdle closes in and enables to robot to lower the speed and predict the best position to jump over. The third algorithm then determines its jumping trajectory, based on the speed to select the appropriate leg thrust to facilitate the leap and landing. After running initial tests without safety harness, the root is able to perform multiple jumps without the help of a safety harness. Watch the video to see MIT’s marvels.