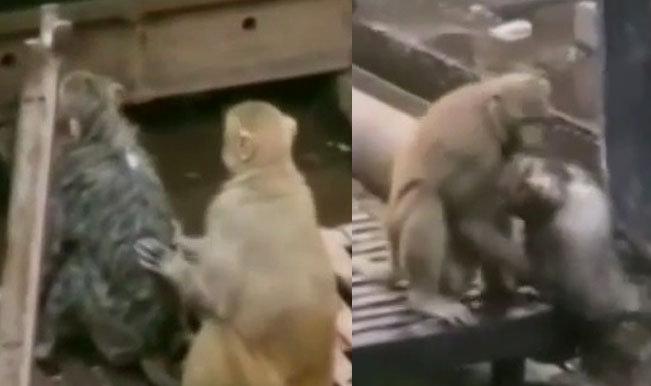 If humanity was meant only for sensible human activity, then the meaning should be re written after watching this video.  Here is a video that will make you realise the love, understanding, feelings were not word coined for humans; animals follow all the rational activities with utmost dedication. Also Read - Karnataka Villagers Perform Last Rites of Beloved Pet Monkey, Construct Temple in His Memory

In this video, a monkey who fell on the ground after being hit by a heavy shock of 25,000 Watt was brought to life after repeated efforts of its companion. The monkey which fell into a gutter after falling on the ground was dragged out of it while onlookers video graphed the scene at Kanpur station.According to doctors, the monkey when found that the monkey hit by shock was not responding after being pulled out, he did cardiac push to regain his heart beat. Also Read - Hindu Boys Form Human Chain Around Muslim 'Baraat' To Safely Escort Them in Violence-Hit Kanpur

Experts say that monkeys are caring and they behave and think like humans, prime reason being the the scientific belief of human evolution from monkeys. During an accident or other such mishaps, monkeys usually stay with the dead bodies of their children for a longer period of time when compared to other animals.

Watch the video to see the heart warming response of the monkey.