The tenth edition of Indian Premier League will kick-start from April 5, 2017, and Mumbai Indians will play the first match of this season against Rising Pune Supergiants on April 6, 2017 at 8.00 pm.

Mumbai Indians is one of the most celebrated teams in the Indian Premier League. The VIVO IPL 2017 has Mumbai Indians as one of the eight teams. The tenth edition of Indian Premier League will kick-start from April 5, 2017, and Mumbai Indians will play the first match of this season against Rising Pune Supergiants. The match between MI and RPS will be played in Pune on April 6, 2017 at 8.00 pm. Indian batsman Rohit Sharma heads the two-time champions and made headlines with some exciting buys at the IPL Auction 2017. Mumbai Indians boasted of winning the highest paid Indian player, Karn Sharma in their team for a whopping Rs 3.2 crore. The Ambani supported team has a huge fan base, not only in Mumbai and Maharashtra but all over India. The men in blue will be coached by the former Sri Lankan cricketer, Mahela Jayawardene. Indian Premier League 2017 Schedule announced: Download VIVO IPL 10 complete time table in PDF with venue details.Also Read - IPL 2022: From CSK to KKR, Remaining Purse of IPL Franchises Ahead of Mega Auction

The defending champions in IPL 2016, Mumbai Indians did not enter the playoffs as they ranked fifth in the score table with a net run rate of +0.146. However, the team has been revamped and pumped up after the IPL auctions 2017. They managed to get a back-up player for each and every position as they bid to win their third IPL crown. Akash Ambani had some steaming biding fights to gain a good pacer into the team. Although he lost the battle in many tried, Mumbai Indians landed with Australian fast bowler, Mitchell Johnson. Kolkata Knight Riders IPL 2017 Schedule: Download Time Table of KKR Matches in VIVO IPL 2017 in PDF with venue details. Also Read - HIGHLIGHTS | IPL 2022 Retention: Umran Malik, Abdul Samad Biggest Surprise at Retention; Ishan Kishan, Suresh Raina Released

As per the usual schedule, Mumbai Indians will play fourteen matches to stand a chance of entering the playoffs in IPL 10. Seven on these fourteen matches will be played on the home ground, giving some much-needed action to the Mumbaikars. IPL 2016 saw a change in venue of their home ground owing to the state of drought in Maharashtra. However, IPL 2017 will be played at the Wankhede stadium as per the official schedule released. Also Read - No Hardik Pandya; Irfan Pathan Reckons Mumbai Indians Should Retain Rohit Sharma, Jasprit Bumrah, Kieron Pollard And Ishan Kishan 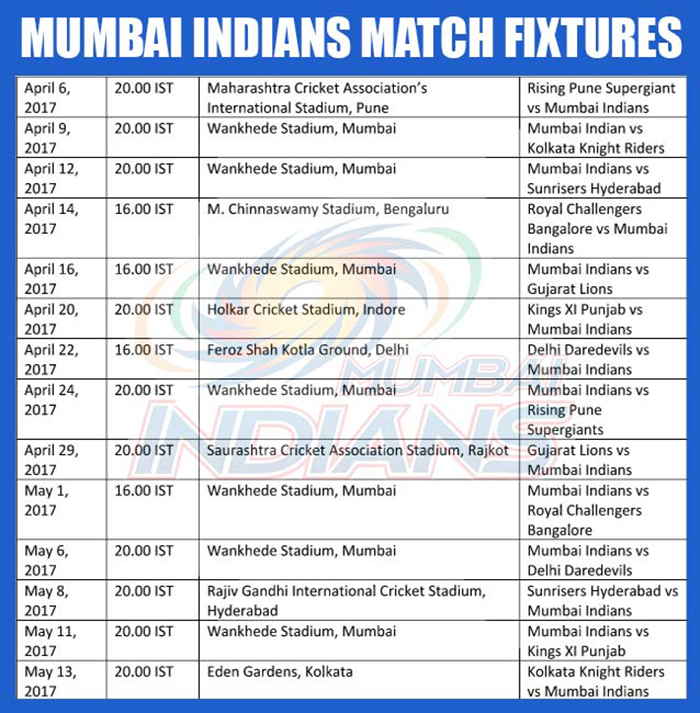 You can download the complete schedule of all Mumbai Indians matches by saving the above image in JPEG or PDF format. Mumbai Indians fans can also bookmark the page by pressing CTRL+D to have an easy access to their favourite team’s matches schedule. Royal Challengers Bangalore IPL 2017 Schedule: Download Time Table of RCB Matches in VIVO IPL 2017 in PDF with venue details.