With 12 points from as many games, Mumbai needs to win all their remaining games in order to book a seat in the Play offs this season. 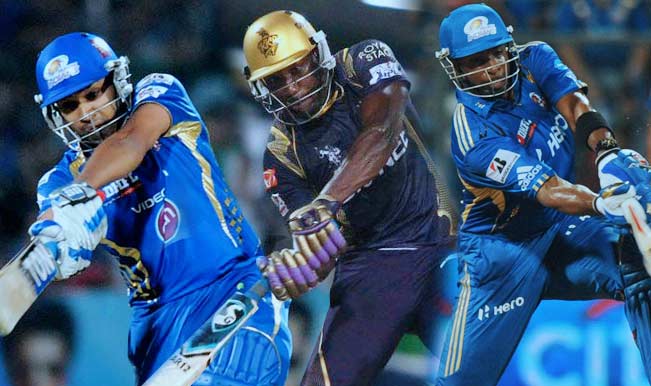 Mumbai Indians will take on the Kolkata Knight Riders in what will be the penultimate group stage game for both the teams in IPL 2015. Although the Knight Riders look safe with 15 points, they still haven’t officially qualified for the play offs yet. This match will be more important for the Mumbai Indians as a loss here will effectively disqualify them from the race of the play offs. With 12 points from as many games, Mumbai needs to win all their remaining games in order to book a seat in the Play offs this season. Kolkata on the other hand will guarantee themselves a spot in the final four with a victory today. Here’s taking a look at the top 5 players to look forward to in today’s game. Also Read - IPL 2021: Reasons Why Andre Russell Could be Released by Kolkata Knight Riders (KKR) Ahead of Mega Auction

1. Rohit Sharma: The captain of the Mumbai Indians has underperformed in the last couple of games which has left his team in a spot of bother. Kolkata Possess one of the best spin attacks in world cricket and if the Mumbai Indians are to have a chance against them, Rohit needs to come good. He is their best batsmen and one of the finest players of spin in world cricket and he certainly needs to step up and lead Mi from the front. Also Read: Day 37 Prediction, Current Points Table and Schedule for upcoming matches of IPL 8. Also Read - 'Bravo, I'm Ahead of You Now' | Kieron Pollard Hilariously Pokes Fun at CSK Allrounder After Fifth IPL Win

2. Kieron Pollard: Pollard played a whirlwind innings of 49 runs in the mammoth chase of 236 against the Royal Challengers Bangalore in his last game for the Mumbai Indians. He almost took them to an improbable victory as his dismissal meant that they were stranded short by 39 runs. He is without a doubt one of the most valuable players for the Mumbai Indians if they have to qualify for the play offs and will have a major role to play. Also Check: Updated Points Table of Pepsi IPL 2015.

3. Andre Russell: He has been extra ordinary for the Knight Riders this season. He has stepped up with the bat, ball and in the field whenever he has been asked to do so by his team. His performance against the Kings XI Punjab in the last game gave the Knight Riders a victory from an impossible position. A hard striker of the ball and deceptively quick with the ball in his hand, he is running in the fore front for the MVP award of the season.

4. Sunil Narine: The magician found his form in the last game picking up 4 important wickets for his team. He has been the key to Success for the Knight Riders in the last couple of season and him returning to form will be a major boost to the defending champions leading into the Play offs if the Knight Riders are successful in winning this game. With everything to play for, Narine will have a lot to prove and achieve in the remaining part of the tournament to his critiques and the fans too.

5. Manish Pandey: Pandey has been long due for an International call up but his uncertain form and inconsistency throughout his career has denied him of that opportunity. Pandey is known as a big match player and there cannot be a bigger stage for him to perform than this game against the Mumbai Indians. Pandey looked in sublime touch against the Kings XI before he gave away his wicket after scoring a quick fire 20. He needs to pounce onto the opportunities that are being given to him specially before the Indian tour of Bangladesh. Check Out: IPL 2015 Schedule – All Match Fixtures and Complete Time Table of IPL.