Nia Sharma can be seen donning a blue-silver saree teamed up with a plunging neckline blouse.

Television actor Nia Sharma is winning hearts with her stint on Ekta Kapoor’s supernatural show Naagin 4. Taking to Instagram, she has shared her pictures flaunting her sexy avatar from the sets of the show and it will leave you smitten over her latest look. In the photos, she can be seen donning a blue-silver saree teamed up with a plunging neckline blouse and bindi. She accessorised her look with earrings.Also Read - Nia Sharma Shows Off Her Hot Dance Moves in Black Halter-Neck Crop Top, Fans Say ‘Maar Hi Dalogi’

Earlier, she has uploaded her photos with actor Anita Hassanandani on the sets of Naagin 4. Anita made her comeback in the Naagin series for a sequence on the show and two ladies did not leave a chance to pose for a click. While Nia looked gorgeous in peach coloured saree, Anita looked breathtaking in black saree. She captioned the pictures, “From Head-banging in Parties to actually working together for the first time… @anitahassanandani.” (sic). Also Read - Bachpan Ka Pyar: Nia Sharma, Ravi Dubey, Arjit Taneja Go Crazy While Dancing on Viral Song -Watch 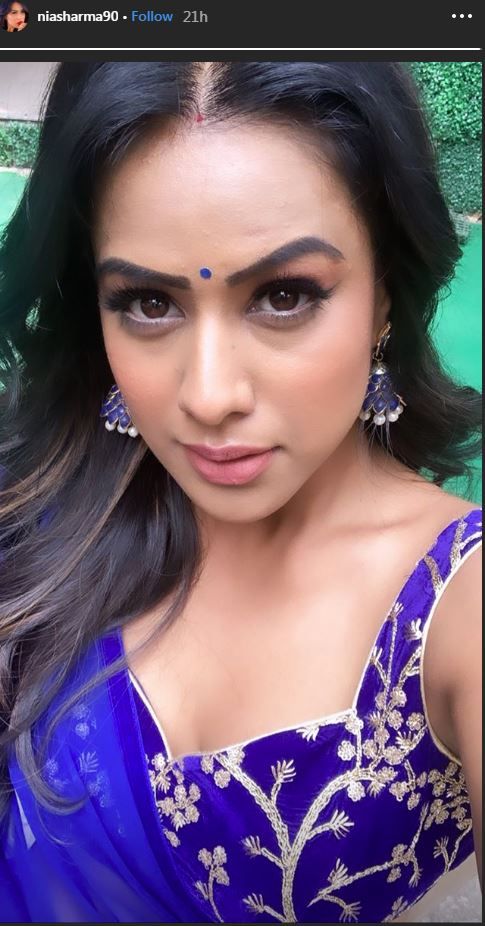 Also Read - Rrahul Sudhir On Rumours of Dating Nia Sharma: I Love Rumours, Let Them Be There | Exclusive

Meanwhile, on the work front, she is currently being featured on Ekta Kapoor’s Naagin 4. She was last seen in Zee5 web series Jamai 2.0. She rose to fame with Vikram Bhatt’s web series Twisted and Twisted 2.

Talking about the Naagin series, the first season of the show premiered in the year 2015 with Mouni Roy in the lead. It ran for seven months and also featured Arjun Bijlani, Adaa Khan and Sudha Chandran in other important roles. After the success of the first season, the team came out with the second season in October 2016 with Mouni Roy spearheading the show once again. She was joined by Karanvir Bohra and Kinshuk Mahajan along with Sudha and Adaa reprising their old characters. The third season premiered in June 2018 and its last episode was aired on May 26, 2019. Surbhi Jyoti and Anita Hassanandani took over as the leads while Pearl V Puri, Rakshanda Khan and Rajat Tokas were seen in other important roles.