Mouni Roy walks the red carpet at Star Screen Awards 2018 wearing a beautiful gown from an international designer. Photos inside...

Actress Mouni Roy was one of the prominent names who graced the last night held Star Screen Awards 2018 in Mumbai. The actress walked the red carpet looking all fabulous in a striking gown. Mouni was wearing a voluminous number from Lebanese designer Robert Abi Nader, which had a plunging neckline and a distinct texture. Partly pinned back hair, pink lips, and no jewellery, this was one look that Mouni rocked with utmost elan.Also Read - Mouni Roy Makes For a Stunning South Indian Bride in a White And Red Silk Saree, Gajra And Mathapati

The actress also bagged an award for her Bollywood debut in Gold, which featured Akshay Kumar opposite her. She posted a photo of herself with the trophy in hand, thanking the channel and others. She posted: Also Read - Mouni Roy And Suraj Nambiar Are Man And Wife, See Pics From South Indian Wedding Here

Check out her photos from the red carpet here: 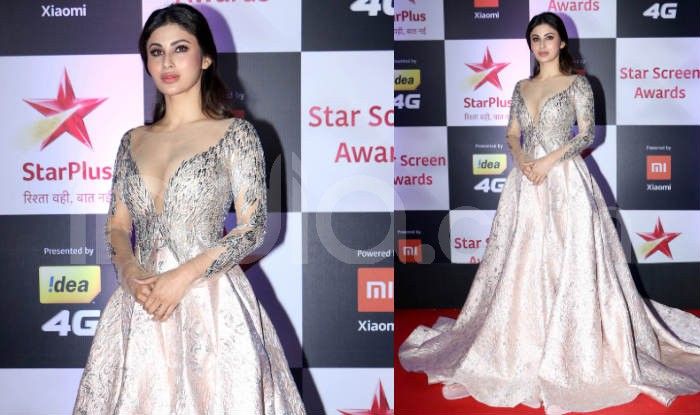 While Mouni did wonders in that outfit, it wasn’t one of her’s extremely unforgettable appearances considering she has done better than this in the past. The actress just rocked an ice-blue lehenga at the recently happened Dinesh Vijan’s wedding reception. Look at this:

On the work front, the actress will soon be seen in Dharma Productions’ Brahmastra. Mouni has finished shooting her part in the film, which also features Ranbir Kapoor, Alia Bhatt and Amitabh Bachchan in important roles. Brahmastra is being directed by Ayan Mukerji, who happens to be one of Mouni’s close friends. In fact, the rumours of the two dating each other have also been surfacing around. Check this Instagram photo Mouni posted sometime back:

For the uninitiated, Mouni rose to fame with her performance in Colors hit show, Naagin. The actress played the role of Shivani, a shape-shifting snake on the show. She also appeared in the second part of the show as Shivanya, impressing the audience with her stunning saree looks. Apart from Brahmastra, the actress has a film titled Made in China in her kitty, in which she has been paired opposite Rajkummar Rao.