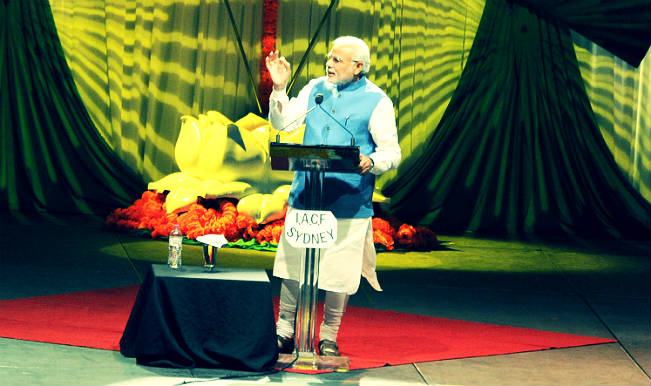 Prime Minister Narendra Modi made an awe-inspiring speech in Allphones Arena in Sydney Australia on November 17. However Narendra Modi’s speech didn’t had anything new on offer, from what he said in Madisaon Sqaure Garden (MSG) in United States of America (USA) in September, the crowd was abuzz on each word he spoke. Narendra Modi raked up many issues and did every bit to inspire/lure the Indian-origin community in Australia to invest or rather one would say, return to India. Also Read - Anticipating Backlash, BJP Turns Off 'Dislike' Button on YouTube Channel Amid PM Modi's Address to The Nation

Narendra Modi arrived in the Olympic Park amid huge fanfare and thunderous applause from the buzzing crowd. It was a momentous occasion to hear ‘Jana Gana Mana’ in country’s largest national indoor park. A sense of patriotism prevailed in the park as it sent chills down ones spine to see over 20,000 people singing the national anthem inside and outside the indoor park together. Also Read - Government Working to Ensure Every Citizen Gets COVID-19 Vaccine: PM Modi in Address to Nation

Surprise and Narendra Modi go hand-in-hand. It came as a surprise when Narendra Modi chose English over Hindi to begin his address. Narendra Modi didn’t fail to invoke nationalism when he said, “We weren’t lucky to die for our motherland, but we should live for our country.” Narendra Modi put forward his government works of six months in front of the people of Australia. (Also read: Highlights of PM Narendra Modi speech as he leaves Indian community spellbound at Allphones Arena in Sydney!)