He gave some quotes that seemed to reflect the actions and policies during his tenure. 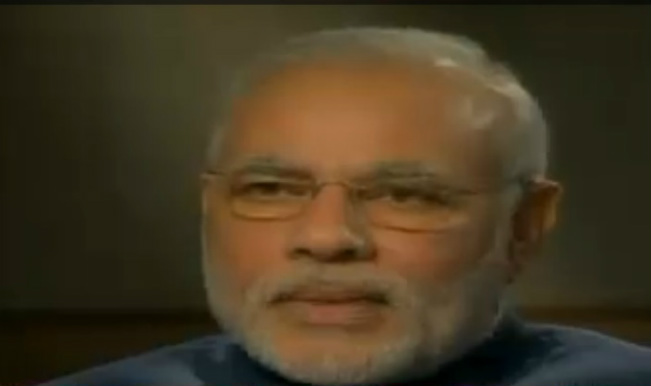 India is on the right track. That seemed to be Narendra Modi’s message during his first interview as the Prime Minister of India. In an interview to CNN’s Farid Zakaria, he spoke exclusively to on a range of issues, from women’s safety to India developing as fast as China. He also answered questions on al-Qaeda’s new branch in the Indian sub-continent. Prime Minister Narendra Modi answered a number of relevant questions. He also gave some quotes that seemed to reflect the actions and policies during his tenure. Also Read - PM Modi Likely to Hold COVID-19 Review Meeting With Chief Ministers of 7 Worst-hit States Next Week

1. Democracy is our great legacy, it’s in our DNA:

Critics have quite often tagged Narendra Modi as a dictator. Fareed Zakaria asked the Prime Minister, “Many people believe that the reason why China has grown at such a rapid pace, maybe the strongest growth in human history, is because they have an authoritarian government. Do you sometimes miss having that kind of authority?” The last part of the question seemed like a cunning way of asking Modi about his own authoritarian streak.

Narendra Modi’s reply was simple. “India doesn’t need to become China, India must regain lost glory. India is a country that once upon a time was called the golden bird. We’ve fallen from where we were before. But now we have the chance to rise again.” He added, “Democracy is our great legacy, it’s in our DNA. I have seen the strength of democracy. If there was no democracy, a person like me who was born in a poor family could not have become the PM.”

2. It’s my absolute belief that India has unlimited talent:

India and China were once developing at a similar pace. Today, China has gone way ahead of India when it comes to development, courtesy of the 8-9% of consistent GDP over the past three decades. Zakaria asked a question about what Modi’s plan was when it comes to tackling the growing disparity between India and China’s growth.

“If you see the details of the last five or ten centuries, you will see that India and China have grown at similar paces. Their contributions to global GDP have risen in parallel, and fallen in parallel. This era once again belongs to Asia,” said Modi, adding, “It’s my absolute belief that India have unlimited talent. I have no doubt about our capabilities. I have a lot of faith in the entrepreneurial nature of our 1.25 billion people. There is a lot of capability. And I have a clear road map to channel it.”

3. I have a one word answer and with great confidence I say ‘Yes’:

India-US relations have had its ups and down. Nobody understands it better than Modi himself, who was barred from entering the country until recently as he was the chief minister of Gujarat during the Hindu-Muslim riots in 2002. He was accused of moral failure as chief minister and even playing a small part in the riots. Now that he is the Prime Minister, Modi is being courted by the Americans.

The countries themselves have had ups and down in their relationship. It was reached its zenith when the nuclear deal was signed and reached its nadir during the Devyani Khobragade incident. When asked if it was possible for India-US ties to reach another level Modi replied, “I have a one word answer and with great confidence I say ‘Yes’. There are many similarities between India and America. There have been ups and downs in the Indo-US relationship in the last century but from the end of the 20th century to the first decade of 21st century, we have witnessed a big change. Our ties have deepened.”

4. Dignity of women should be a collective responsibility:

Safety and rights of women in India have received unparalleled attention over the past few years, more so since the December 16, 2012, rape case of Nirbhaya. When asked about the unending number of rape cases and other issues of violence against women in India, Narendra Modi said, “Dignity of women should be a collective responsibility. Girl child education is important for the empowerment and development of the country.”

He added, “Politicians only make matters worse by commenting on the issue.” Does that explain his stony silence on the issue?

5. Indian Muslims will live for India, will die for India:

This has to be the biggest and most surprising quote that Narendra Modi gave during the interview. al-Qaeda chief Ayman al-Zawahiri recently issued a video where he made an appeal trying to create a similar outfit in India and the Indian sub-continent. “Do you worry that something like this could succeed?” asked Zakaria to which Modi gave a reply that might seem quite uncharacteristic of him.

Another quote that Modi gave was on his work ethic. When asked about his relaxation technique he replied, “I derive pleasure from my work. Every moment I am thinking something new. I draw pleasure in governance.” This may be an indication of Modi’s workaholic nature although this quote will not be considered as important as the five other quotes as they are more important in terms of the issues he spoke about.