Although there are highs and lows in the government after 6 months, it seems that his ‘Achche Din’ promises may come become real 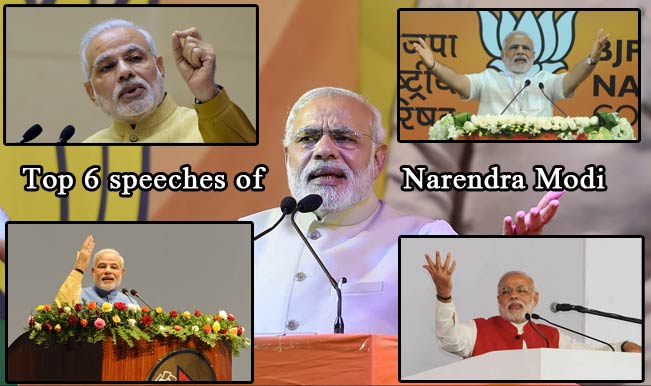 Narendra Modi is one among the politicians with great public speaking skills. His powerful speech delivery skills along with apt answering abilities are truely praiseworthy. If compared to his contemporaries, Modi’s public speeches are commendable. Rarely does he carry a chit or paper for reference, his speeches are usually neatly crafted and delivered without any glitches or annoying pauses. Why say more, AAP leader, Arvind Kejriwal could not resist talking about the oratory skills possessed by the Prime Minister of the country saying that he is a “great orator”. Also Read - Modi Confident Reforms in Past Months Will Boost Manufacture & Agriculture; Says Everyone to Get Vaccine Shots

Narendra Modi speeches has always wooed crowd everywhere, no matter wherever he was and whatever he said. Netizens and citizens have equally been attracted by his talks which is quite visible from the sea of audiences attending his speeches. It is not just in India, he has strong fan base in abroad too. His Madison Square Garden Speech had caught the fancy of the NRIs who  got the glimpse of their favorite leader once in lifetime. After six months of running the government, here are top six speeches of the Prime Minister of India at various important events in the country. Read-Narendra Modi’s Government 6-month report card: Top 6 cabinet ministers who performed well! Also Read - Bihar Polls: Rahul Gandhi Accuses PM Modi of Not Talking About Problems Like Unemployment Faced by Our Country

After the declaration of the Lok Sabha Elections 2014 where BJP won with a clear majority, the country went into a celebrations mood and Modi’s victory speech was a cherry on the cake. He thanked the people of Vadodara for their support and blessings and said that each one of them had fulfilled their duties by electing him. One among the powerful speeches after winning the 2014 general elections he said that the government does not belong to any particular party but to the people of the country. Watch the full video here

The Prime Minister of India fought back tears in his first speech in the Parliament talking about receiving a position with the blessing of a country of people. Before entering the Parliament he bowed down and touched the steps of the Parliament as a mark of respect. It was not just Modi who broke down during the speech but also other leader including LK Advani and senior BJP leader Ravi Shankar Prasad. But like his usual speeches he avoided talking anything against the opposition party and said that the country’s government has worked for its benefit.

Prime Minister had redefined his position to the country by saying that he was he is amongst the people of the nation as the Prime Minister but as the Prime servant. Modi spoke about various issues ranging from the development the country requires, problems faced by the nation and how to overcome various social hazards. Modi’s maiden project ‘Make in India’ first found its entry into the country. He said, “Come, Make in India! Come, Manufacture in India!”

Prime Minister of the country never miss an occasion to interact with the country people. Usually Modi’s speeches are attended by adults, but here he got the right event to deliver his messages to the future of the nation-children. He said that we must restore respect for the teachers and the country should be able to produce quality teachers for the world. Remembering the great teacher, Dr. Radhakrishnan he said that doing great things does not necessarily make a person great, it is small things that make people big. He also focused on cleanliness and empowerment of girl children’s education. Describing himself as a task-master he said that he is working hard for the nation and would want everyone to co-operate with him.

Narendra Modi launched his Make in India campaign on September 25, 2014 at from Vigyan Bhawan in New Delhi. He said, “Make in India. Sell anywhere but manufacture here. We have the skill and talent for it.” He had first spoke about the initiative during the Independence Day speech. After explaining his maiden initiative, he invited the nations of the world to invest in India referring to FDI as First Develop India.

Narendra Modi’s Madison Square Garden Speech is sure to go down in the pages of history where a crowd of almost 20,000 NRI chanted his name when he entered the place. Thanking for such a warm welcome, Modi announced hassel free travelling for the Indian diaspora and said that PIO card holders staying in India on long term basis will not have to report to local police station. In his 75 minutse long speech, he spoke about the speedy development which the country requires, wished people on Navratri and affirmed that India will soon be leading the 21st century in development. Read- Narendra Modi 6 month report card: Top 7 positives of Achche Din Wali Sarkaar!

After the historic swearing-in of Modi on May 26, Narendra Modi government has a report card that is surely above average. There are surely highs and lows in the government and 6 month is not an accurate yardstick to measure the goodness of a government but with the foreign trips and speeches that Prime Minister of the country is making, it seems that his ‘Achche Din’ promises may come soon.