Singing sensational Neha Kakkar, who has been into buzz for her break-up with Himansh Kohli, is making a chic and stylish statement on her Instagram account. Dressed in a black crop top and fluffy long skirt, she has accessorised her look with a statement neckpiece, a pair of earrings and a trendy finger ring. Minimal makeup, nude lipstick and killer expressions are making her look hotter than ever. Also Read - TRP Report: Anupama Beats Yeh Rishta Kya Kehlata Hai to Top Week 1, Naagin 5-Taarak Mehta Slip From Top Five

As per the description on her post, she feels like a queen in the dress and we can’t deny it. Sharing the post, she wrote, “Felt like a Queen wearing this. @avigowariker what a click! 👏🏼 Must Thank My Team who always make me look the best!!.#MUA : @ritikavatsmakeupandhair @moin.sabri .My Outfit & Neck piece by @surabhichopralabel . Styled by @styledose1. Jewellery: @rimayu07 #NehaKakkar #Style #PostPackUpShot #AvinashGowarikar #BlackDress #LoveBlack.” (sic) Also Read - Indian Idol 12: Himesh Reshammiya Breaks Down In Tears After Mohammed Danish's Performance, Know Here Why

Earlier, ‘Aankh Maarey’ singer took to social media to give it back to those who have been targeting Himansh Kohli for hurting her. Neha wrote in her Instagram stories that it’s not fair to spread hatred against someone without knowing the actual facts. She added that she said she was hurt but she never said that Himansh cheated on her.

Neha wrote, “I read some article online which was Fake & Disturbing. Yes, I said I’m hurt but I NEVER said I got betrayed. When it comes to being Loyal, He’s TheBest! So plz Stop blaming him & putting Wrong Allegations. We just can’t spoil anybody’s reputation without even knowing the facts!” (sic) 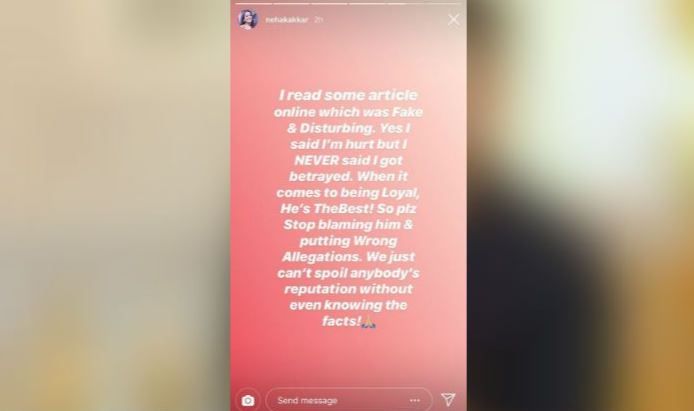 On the professional front, Neha Kakkar is on a national tour, performing in various cities in India and her recent live performance in Ahmedabad shows her breaking down on stage while singing Maahi Ve. Right before singing it, Neha had announced that she was dedicating the song to all those nursing a broken heart.