Neha Kakkar Makes Shocking Statement For ex-Boyfriend Himansh Kohli, Says ‘he is Best When Comes to Being Loyal’

Singer Neha Kakkar has taken to social media to give it back to those who have been targeting Himansh Kohli for hurting her. Neha wrote in her Instagram stories that it’s not fair to spread hatred against someone without knowing the actual facts. She added that she said she was hurt but she never said that Himansh cheated on her. Also Read - Indian Idol 12 Kishore Kumar Special Episode: Aditya Narayan Reacts To Amit Kumar's Criticism

Neha wrote, “I read some article online which was Fake & Disturbing. Yes, I said I’m hurt but I NEVER said I got betrayed. When it comes to being Loyal, He’s TheBest! So plz Stop blaming him & putting Wrong Allegations. We just can’t spoil anybody’s reputation without even knowing the facts!” (sic) Also Read - Neha Kakkar-Rohanpreet Singh Fight Like Little Kids, He Says 'Hadd Hai Yaar' | Watch 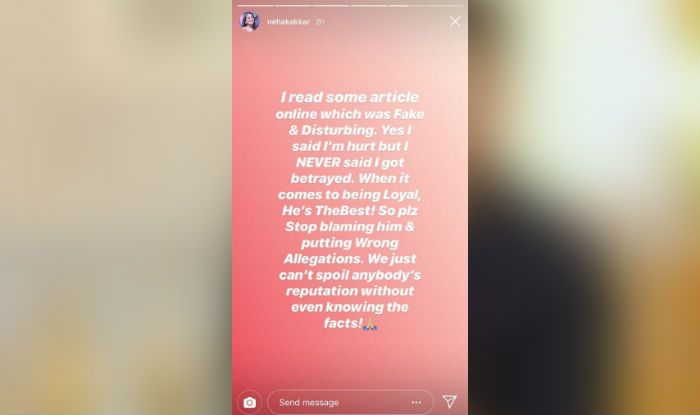 Neha has been dealing with depression for some time now. She herself revealed the same in one of her social media posts. The ‘Second-Hand Jawaani‘ singer also deleted her photos with Himansh from her all social media accounts, thereby, hinting that there had indeed been trouble in her paradise. Also Read - Indian Idol 12 Controversy: Amit Kumar's Shocking Revelation For Judges And Makers, Says Was 'Told to Praise Everyone'

She then broke down on the sets of her reality show Indian Idol 10 when a contestant performed a heartwarming romantic number. She also couldn’t resist tears during one of her performances on stage. Neha broke down at her concert in Ahmedabad. However, everything seems better now. Neha has been attending events and performing at concerts with much ease. She also appeared as a special guest on Super Dancer Chapter 3. Neha received the support of other star judges on the show – Shilpa Shetty and Geeta Kapur when she broke down watching a contestant performing on one of her songs.

She said on the show, “Life is difficult. So much has happened to me in the past. And when people judge you for that, it hurts a lot. My parents have brought me up really well and I have never damaged anybody.”

Sympathising with her, Shilpa told her, “When people know you, never complain and never explain.”