Nia Sharma looks like a million bucks in her latest Instagram picture. She flaunts an all-black look with dramatic eye makeup.

TV actor Nia Sharma is here to make her fans go crazy over her latest look. She has posted a new picture on Instagram in which she can be seen looking like her gorgeous self. Nia is staring into the camera looking like a million bucks. The actor wears a black tulle dress and a statement neckpiece with a giant Cross symbol. Heavily dramatic eyes with wing eyeliner, glossy lips and big hair finish her look. Nia appears as striking as ever in her latest post. Also Read - Nia Sharma Grooves To 'In Da Club' on The Street of Mumbai Amid COVID-19 Spike | WATCH

The caption on her post reads, “Things I love:
Nude makeup
When my nude makeup is on point.” (sic) Also Read - Nia Sharma Grooves to Cardi B's Song 'Up' As She Looks Hot in Little Pink Dress | Watch Viral Video

Things I love: Nude makeup When my nude makeup is on point.

This is not the only picture on Nia’s Instagram timeline that oozes hotness. Her social media account is filled with pictures in which the actor is seen posing like she’s all set to rule the world with her sex appeal… after all she’s Asia’s second sexiest woman!

She was seen last night joining her colleagues from the TV industry in celebrating actor Anita Hassanandani‘s birthday in Mumbai. Anita and her husband Rohit Reddy hosted a birthday party for their industry friends and Nia arrived looking extremely stylish at the do. She went for an all-black look and wore leather shorts with matching shirt and a pair of ankle-length boots. Nia added a pair of big gold hoops and finished her look with smokey eyes and nude lips. Check out these pictures of Nia Sharma in which she is seen posing for the paparazzi: 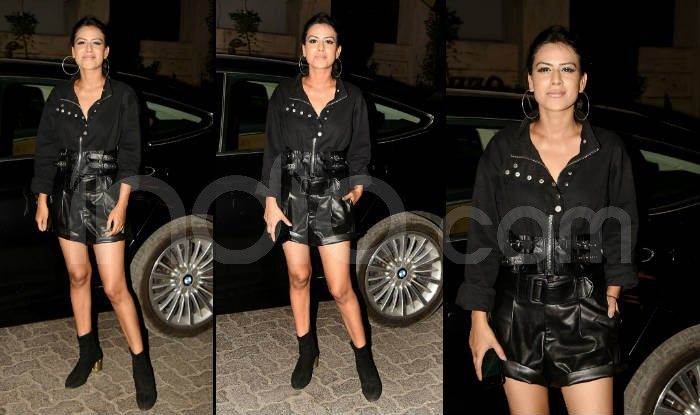 Earlier, in an interview with an entertainment portal, Nia talked about performing ‘bold’ roles on-screen. She was quoted by PeepingMoon saying that she doesn’t shy away from performing in front of the camera and what she doesn’t want to do is just stand still and not perform. Talking about the kind of bold image she has made for herself, Nia said that the meaning of bold for her is a character ‘who speaks her mind, who doesn’t shy away from speaking her opinion and someone who stands for herself.’