Nita Ambani looked radiant while posing with Radhika Merchant, the lady love of Anant Ambani, during the Ganesh Chaturthi celebrations on Monday. Joining them was Isha Ambani Piramal. Check out all the pictures here.

The Ambani family is known to be quite traditional and their festival-bashes unite the entire city. Last evening was no less. Nita Ambani cut a striking picture when she came out to pose for the shutterbugs, first with her daughter Isha Ambani and then with her future daughter-in-law Radhika Merchant. The ladies were dressed beautifully in traditional lehengas and looked ethereal in every picture. Also Read - Ganesh Chaturthi 2019: Arjun Kapoor, Sonali Bendre, Ajay Devgn And Other Bollywood Celebs Wish Fans Ganpati Bappa Mori Moriya

The mother-of-three wore a bespoke lehenga by designer duo and one of her favourites – Abu Jani & Sandeep Khosla. Her lehenga was styled with emerald and diamond jewellery. Even Isha’s look was kept similar to her mom. The young entrepeneur, who is now married to Anand Piramal, also wore the similarly designed lehenga in pink colour by AJSK and looked extremely pretty. Here are the pictures: Also Read - Arpita Khan Sharma Wears a Stunning Purple Sabyasachi Suit While Bringing Bappa Home on Ganesh Chaturthi - Pics 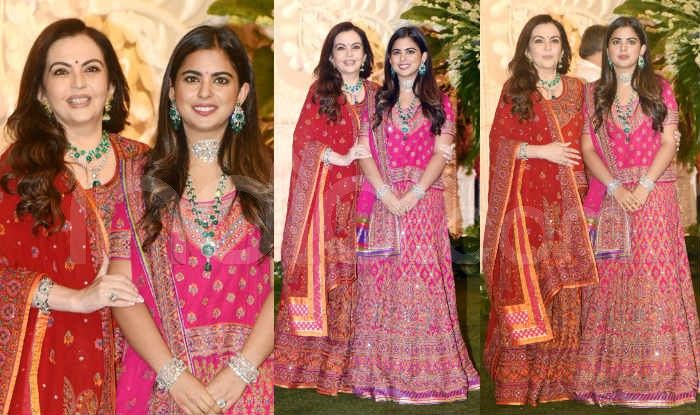 Keeping her look youthful and bright, Radhika dressed up in a pink coloured embellished lehenga from designer duo Shyamal & Bhumika. She styled her look with a diamond and gold necklace and kept her hair half tied. Check this out:

All the other members in the family were also present on the occasion of Ganesh Chaturthi. Akash Ambani and his wife Shloka Mehta were seen inside Antila with Shloka’s parents and others during the Ganesh-aarti. The family’s pictures have been going viral on social media since last night. See this:

Everyone dressed to the T as they visited Bappa at the Ambanis to exchange Ganesh festival wishes. It was one starry affair!