Netizens vow to 'not forgive the Ministry of Environment and Climate Change' as horrific images and videos of the gas leak and successive blast from Baghjaan Oil Field in Assam's Tinsukia emerge, that destroyed several species of animals and displaced atleast 1,610 families

Spewing gas continuously for the last 14 days, the damaged Baghjan oil well suddenly blasted and was engulfed in massive fire that destroyed several species of animals and displaced atleast 25000 people in Assam‘s Tinsukia. Earlier, the chances of an immediate fire had decreased due to incessant rain yet it destroyed the aquatic life in the area. Also Read - After Mumbai Police Makes Monica-Chandler Wear Masks, Assam Police Does Same With Pooja Hegde-Prabhas on Poster of Radhe Shyam

Ironically, ahead of World Environment Day, the Union Ministry for Environment, Forest and Climate Change (MoEFCC) had permitted oil drilling for hydrocarbons “at a distance as close as 500 meters” in a national park in Assam which left the netizens furious. Raising the ecological threat that Oil India Limited’s (OIL) bid to drill posed went unheard and soon the blast took place as the “very rich biodiversity and very valuable water system in the world faces the risk of irreversible pollution” now. Also Read - US Presidential Election 2020: Facebook Planning to Ban Political Ads Before November's Polls

Taking to their respective social media handles, the netizens lashed OIL, MoEFCC and Government of Assam for the “Chernobyl” like disaster. While one user on Twitter wrote, “Assam’s baghjan oil field had a massive explosion today because of a continued gas leak. The fire is spreading but no coverage of this news in national media!! If it was not in NE, everyone would have trended hts of #PrayForBaghjan Our resources are national, our problems are not (sic)” another lashed on Facebook, “The Oil belongs to the Nation! The Perils belong to the People! #SOSBaghjan P.S. Let this be a reminder; it’s been more than 14days for the first oil spillage but here we are ; Unheard. Unseen. Uncared. The land will burn. The people will get displaced. Life will go on. DHANDA will go on (sic).” Also Read - 'Not Right to Question Police': Ex-Ally Shiv Sena Backs BJP Over Vikas Dubey Encounter

Check out netizens’ reaction on the news here:

Assam’s baghjan oil field had a massive explosion today because of a continued gas leak. The fire is spreading but no coverage of this news in national media!! If it was not in NE, everyone would have trended hts of #PrayForBaghjan Our resources are national, our problems are not pic.twitter.com/ER6kBlo3SO

🔥Assam is Burning since 14 Days.BJP is busy doing Virtual Rallies for Bihar Elections.
Assam is also a BJP ruled State.

Baghjaan Oil Field, Tinsukia, Assam.
Gas was continuously leaking for 14 days nd suddenly it got exploded nd caught fire,Still no national media gave a fcuk abt it. Incident from NE will never give thm the TRP bcaz other states people r least intrested to knw whts happening in NE pic.twitter.com/vseiEsRdN5 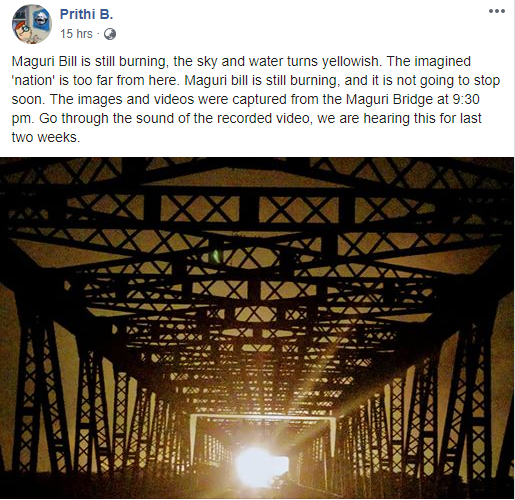 Assam’s Baghjan Oil Field Catches Fire. Baghjan fire puts biodiversity of Dibru-Saikhowa National Park in danger.The oil well at Baghjan Tinsukia had a blowout on May 27 and has been leaking gas for the past 14 days.https://t.co/mK3CDp6bpP pic.twitter.com/Wut5YTlxC1 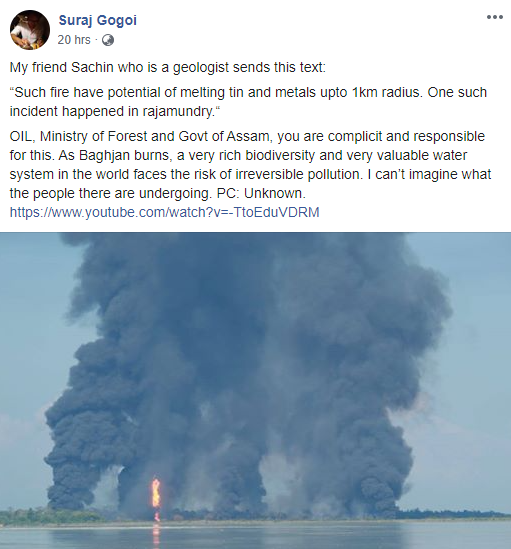 The tragedy of massive fire at Baghjan Oil field in Assam is a result of a negligence.The incident points out the ignoring attitude of center towards Assam.There should be proper enquiry 4 irresponsibility when the gas leakage started since 2 weeks#SaveBaghjanSaveAssam pic.twitter.com/VIM9m8siAi

I’m at loss for words. Please share cause The World needs to know what The Ministry has done to our Green Assam! If you watched my last rap song, I did mention that the Ministry gave permission for Oil Drilling too close to the Dibru Saikhowa National Park violating standard norms. As a result of their activities an Oil blowout occurred that led to an oil spill which killed several exotic species, including the Endangered River Dolphin. Unable to stop the Oil Blowout for the last 13 days, today it caught fire. Villages have been engulfed in flames, More than 1610 families have been displaced. At a time when they should be social distancing they are being held in a village school (as you can see in the 3rd video). Petitions and requests were made to pull the plug on this project but the OIL and the Ministry plainly refused because of their selfish vested interests, the amount of oil they could withdraw from here and the scope for profit. Now Nation wants to know why are we sacrificing our biodiversity, Forests and National Parks for projects that are not even well planned? Why isn’t our National media raising the right questions? This is way more important than the Hindu v.s Muslim debate ! . . Video credits: @fridays4future.ghy_ . . . . #assam #environment #tuesday #environmentaljustice #news #disaster #fire #india #saveanimalslives #forests #northeast @discovery @bbcearth @bbcnewsindia @bbcnews @timesofindia @indianexpress @scoopwhoop @thequint @northeast_india @hindustantimes

Even though the fire has been contained in a 1.5-km radius around the site but the blowout is reportedly continuing to leak gas in the same magnitude due to the lack of safety measures on behalf of the drilling company. Being 1.108 kms from Dibru-Saikhowa National Park and within 1 km from the famous Maguri-Matapung Wetland, the blast dislocated several indegenious people while killing rare gangetic dophins, innumerable fishes and other animals.

The two firefighters had gone missing after the well caught fire on Tuesday and their bodies were recovered by an NDRF team this morning, Oil India Spokesperson Tridiv Hazarika told PTI. Oil India Limited has said that it could take as long as four weeks to put out the blaze.