Indian cinema is filled with hilarious and in most cases embarrassing photographs. One such throwback picture featuring South superstar Rajinikanth with sex siren Silk Smitha is one you just can’t unsee. The photograph has a young Rajinikanth with the late B-grade bombshell making you mutter WHY! But then you remember of the glorious career of India’s biggest overnight sensation which took the film industry by storm. Silk Smith born on December 2, 1960, became a household name courtesy her bold and sexy avatars. Silk died at the age of 35 after apparently committing suicide on September 23, 1996. Remembering Silk on her 56th birth anniversary, we have this awkward yet iconic picture with country’s biggest superstar Rajinikanth. ALSO READ: Silk Smitha birthday: 5 things to know about the original ‘Dirty Picture’ girl. Also Read - Tried The 'Rajinikanth Style' Dosa? Mumbai Eatery's Unique Style of Serving Dosa Goes Viral | Watch Video

Silk Smith was a big name in her own right, working in over 450 films in different languages – Hindi, Telugu, Tamil, Kannada and Malayalam. Her journey from a peasant girl to becoming the box-office bombshell at a tender age of 22, Silk ruled the men-dominated glamorous industry. Known for her bold personality, she did not shy away from portraying her luscious figure on-screen. She showed no inhibitions and cashed her oomph factor to become a big name in short time. Such was the craze among her fans. Silk overshadowed the biggest stars like Rajinikanth, Chiranjeevi and Kamal Hassan – concerning both popularity and fees. Also Read - Kamal Haasan Meets Rajinikanth At His Poes Garden Residence 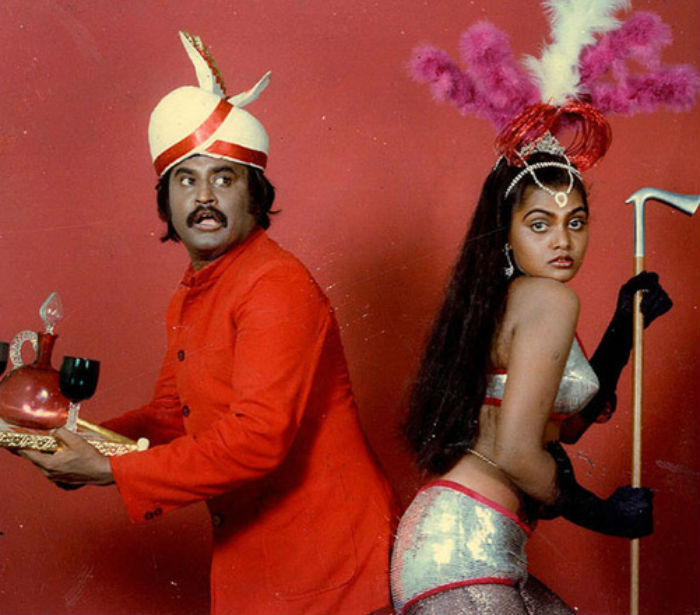 The last time we heard of Rajinikanth and Silk Smitha’s names together was in 2011 when a biopic on the late starlet had released. Titled The Dirty Picture starred Vidya Balan as Silk while veteran actor Naseeruddin Shah played Suryakanth lusting for Silk. Many sections of audiences claimed the character to be based on Rajinikanth. The fans of the legendary actor did not take it well and threatened to turn violent. It was only after filmmakers clarified that the Naseeruddin Shah’s character was that of an ageing hero while Rajinikanth was in his prime form when he did movies with the sexy B-grade heroine. As for now, enjoy this hot song from Telugu movie Debbaku Debba featuring Robot 2.0 actor Rajinikanth and Silk Smitha.