In the photos posted on the Instagram handle of the clothing brand, the model could be seen wearing a red suit without covering her head and posing for the camera with the Gurdwara Darbar Sahib in the background.

According to sources, the woman from Lahore who runs Mannat, a ready-to-wear women’s online clothing brand in Pakistan, got a photoshoot done in the Kartarpur Sahib complex recently with models posing with a bare head with their back towards the gurdwara. Also Read - Separated in 1947, 2 Friends From Across The Border Reunite After 74 Years At Kartarpur Corridor

The owner of the online store has also posted several photos of the model with an uncovered head on her social media account, hoping to target a specific cliental especially the Sikh women in the diaspora. Also Read - Punjab CM-led Delegation Pays Obeisance at Kartarpur Sahib in Pakistan on Eve of Gurpurab

In the photos posted on the Instagram handle ‘mannat_clothing’ a day ago, the woman could be seen wearing a red suit without covering her head and posing for the camera with the Gurdwara Darbar Sahib in the background. 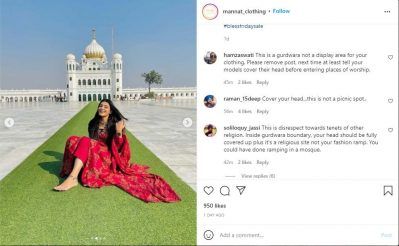 While almost all the comments bashed the woman and the clothing brand for hurting religious sentiments and not being respectful in the gurdwara, many comments called the post ‘shameful’ and asked the account to delete it.

An Instagram user commented saying, “Cover your head… this is not a picnic spot.” Another user said, “This is disrespect towards tenets of other religions. Inside the gurdwara boundary, your head should be fully covered up plus it’s a religious site, not your fashion ramp. You could have done the modelling in a mosque. (sic)” Here are some of the comments from the post: 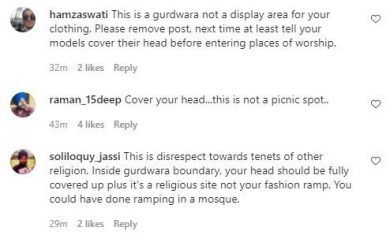 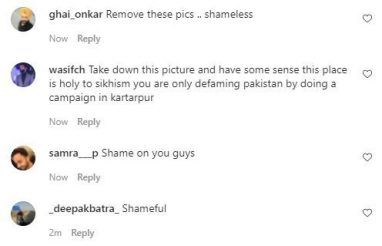 Later on Monday, the police in Pakistan’s Punjab launched an investigation after the post stirred up a controversy on social media. The police probe was initiated after an Indian Sikh independent journalist, Ravinder Singh Robin, criticised the model’s photos on Twitter. “Modelling bareheaded for ladies’ attire, in the premises of Gurdwara Sri Darbar Sahib at #KartarpurSahib in Pakistan, by a Lahorite woman has [severely] hurt the religious sentiments of Sikhs. Further the pictures were uploaded on social media,” he tweeted.

Replying to his tweet, Azhar Mashwani, the Punjab chief minister’s focal person for digital media, said the matter had been “forwarded to concerned authorities for legal action”.

Shortly after, Punjab Police tweeted saying, “Punjab Police are investigating all aspects related to this incident and strict legal action will be taken against responsible. Management of concerned brand & model are being investigated. Worship places of all religions are equally respectable.”

Punjab Police are investigating all aspects related to this incident and strict legal action will be taken against responsible. Management of concerned brand & model are being investigated. Worship places of all religions are equally respectable.@MashwaniAzhar https://t.co/HLqwRKmOKY

Sarna said he would take up the issue with Chairman of Pakistan Evacuee Trust Property Board Dr. Amar Ahmad on priority and ask him to make the PMU staff aware of the Sikh rehat maryada (Sikh code of religious conduct).

Sarna called upon Pakistani authorities to place written instructions in Urdu about Sikh ‘maryada’ after a model posed bare-headed for a photoshoot at Sri Kartarpur Sahib.

Sarna urged the PSGPC and local authorities in Narowal that visitors to the historical shrine must be sensitised about the Sikh code of conduct applicable at gurdwaras.

“Instructions should be placed in Urdu and English for head-covering and about not showing the back to the holy site,” he said in a media statement.

Sources didn’t rule out the possibility of the Project Management Unit (PMU), a department created by the Pakistan government to exclusively run the affairs of Gurdwara Darbar Sahib, Kartarpur Sahib, charging for the shoot out in the Gurdwara complex to increase its income. PMU has already imposed a fee of Pakistani Rs 200 to enter the Gurdwara complex.

Former general secretary of SGPC Kiranjot Kaur said that the commercialization of a religious place was highly objectionable. “It is wrong and authorities must act on it immediately”, she said.

Notably, the Shiromani Gurdwara Parbandhak Committee, the single largest representative body of Sikhs has pasted posters inside the gurdwara complex cautioning devotees to not shoot entertainment videos after a few of them were ‘caught’ shooting TikTok videos.